China warns citizens ahead of Manila protest on Friday 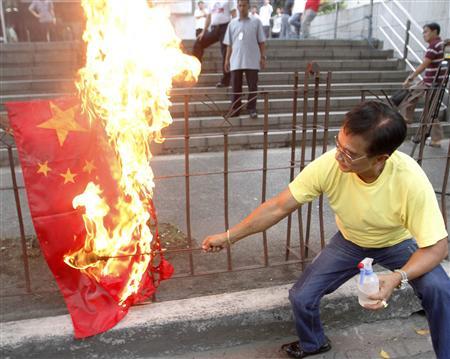 Protest in Manila May 8th

China warned its citizens in Manila to stay off the streets and take precautions during planned anti-Chinese protests on Friday, a sign of mounting tensions during a standoff in the resource-rich South China Sea.

The planned protest of about 1,000 people could heighten tensions between China and the Philippines over what is known as the Scarborough Shoal in English and Huangyan island in Chinese in the southeastern region of the disputed waters.

On Tuesday, China’s embassy in Manila posted an advisory on its website asking its citizens to stay indoors, avoid demonstrations and refrain from confrontations with locals, anticipating a “large-scale” anti-China protest on Friday.

That coincided with a stern warning from Beijing that China had made “every preparation” to counter what it called potential expansion of the conflict by the Philippines, one of Washington’s closest allies in Asia.

Civil society and political groups with links to President Benigno Aquino’s political allies plan to take to the streets on Friday to protest the Chinese presence in the Scarborough shoal, which Manila says is within its jurisdiction.

A spokesman of China’s foreign ministry accused Manila of using the standoff to incite domestic opinion, adding it has “damaged the atmosphere of Sino-Philippine relations”.

The protest organisers plan similar actions in China’s embassies and consulates in the United States, Canada, Australia, Italy and other Asian capitals.

“We are seeking a peaceful solution through political and diplomatic means,” said Risa Hontiveros, a former lawmaker and member of Akbayan party, one of the protest organisers.

Akbayan is among political parties allied with Aquino. Its leader, Ronald Llamas, sits in the cabinet as political adviser and two of its members in the lower house of congress organised a trip to the contested Spratly island last year.

Foreign Affairs Secretary Albert del Rosario said in a statement Washington has reaffirmed its commitment to help Manila if violence erupts in the disputed seas, citing a 1951 mutual defence pact with the United States.

The warning by Beijing comes as tensions in the South China Sea enter a new and more contentious chapter, with claimant nations searching deeper into disputed waters for energy supplies while building up their navies and military alliances, especially with the United States.

Proven and undiscovered oil reserve estimates in the South China Sea range as high as 213 billion barrels of oil, the U.S. Energy Information Administration said in a 2008 report. That would surpass every country’s proven oil reserves except Saudi Arabia and Venezuela, according to the BP Statistical Review.

China, which claims the South China Sea as its territory based on historical records, has disputes with the Philippines, Vietnam, Brunei, Malaysia and Taiwan over the waters.

The standoff in the shoal began in April when a Philippines Navy surveillance plane spotted eight Chinese fishing boats in the area. Manila responded by sending its largest warship, a U.S. Hamilton-class cutter, to check on the Chinese presence.