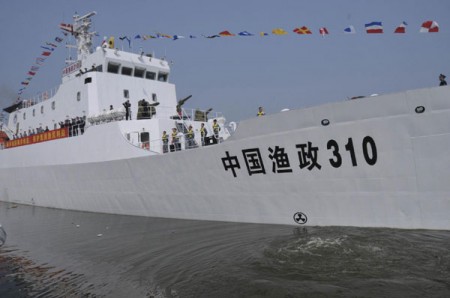 The newspaper says: Having just fulfilled its task to protect fishing operation in Huangyan Island area, without taking any rest for either the ship or the crew, China Fishery Administration 310 went back to the South China Sea to patrol the area again when it suddenly received an order at 9:40 am, May 18 to go in a hurry to 11o22’N, 110 o45’E to protect Chinese fishing boats from being seized by a certain country.

It turned out that five Chinese fishing boats from Guangxi, China were chased and disturbed by three gunboats of a certain country at the area of incident. One of them Guibei Fishing 88088 sent an emergency message for help. At that time, China Fishery Administration 310 was 140 nautical mile away from the site and is thus located closest to the area among all the public service ship of the Chinese government.

As soon as it had received the order, it changed its course and sailed at the high speed of 21 knot towards the site where the fishing boats were disturbed. At the same time it notified through the command centre Guibei Fishing 88088and other fishing boats to sail towards it.

An official of the South China Sea Fishery Administration Bureau said that the gun boats of a certain country intended to seize those fishing boats. Judging from the information provided by the fishing boats, they had been dealing with the gunboats for nearly 20 hours.

The report points out that when the said country found that China’s currently most advanced fishery administration ship was sailing at top speed to rescue Chinese fishing boats, its gunboats turned round and left at about 1300 hrs according to an report from Guibei Fishing 88088.