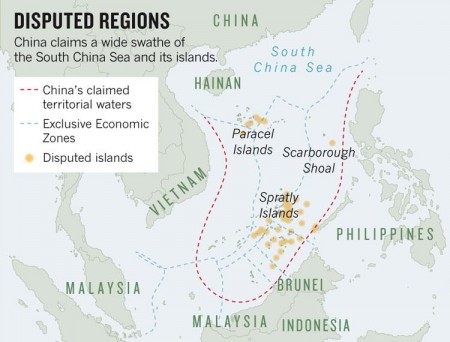 Alongside an armada of paramilitary patrol vessels and fishing boats, China has fired off a barrage of historical records to reinforce its claim over a disputed shoal near the Philippines in the South China Sea.

While this propaganda broadside makes it clear Beijing will take a tough line with Manila as a standoff over Scarborough Shoal continues into a seventh week, the exact legal justification for China’s claim and the full extent of the territory affected remain uncertain, according to experts in maritime law.

Like most of its claims to vast expanses of the resource-rich and strategically important South China Sea, Beijing prefers to remain ambiguous about the details, they say.

This allows the ruling Communist Party to demonstrate to an increasingly nationalistic domestic audience that it can defend China’s right to control a swathe of ocean territory.

And, it avoids further inflaming tensions with neighbours who are already apprehensive about China’s growing military power and territorial ambition.

“This ambiguity serves China’s domestic purpose which is to safeguard the government’s legitimacy and satisfy domestic public opinion,” said Sun Yun, a Washington D.C.-based China foreign policy expert and a former analyst for the International Crisis Group in Beijing.

Rival claims to territory in the South China Sea are one of the biggest potential flashpoints in the Asia-Pacific region.

China, the Philippines, Vietnam, Taiwan, Malaysia and Brunei all have territorial claims across a waterway that provides 10 per cent of the global fisheries catch and carries $5 trillion in ship-borne trade. Half the world’s shipping tonnage traverses its sea lanes.

The United States, which claims national interests in the South China Sea, recently completed naval exercises with the Philippines near Scarborough Shoal. It is stepping up its military presence in the region as part of a strategic “pivot” towards Asia after more than a decade of wars in Iraq and Afghanistan.

Beijing and Manila both claim sovereignty over the group of rocks, reefs and small islands about 220 km (132 miles) from the Philippines.

The Philippines says the shoal falls within its 200 nautical mile Exclusive Economic Zone (EEZ), giving it the right to exploit the natural resources in this area.

In a concerted response from Beijing, official government spokesmen, senior diplomats and reports carried by influential state-controlled media outlets have drawn on the histories of earlier dynasties to rebut Manila’s claim.

They say the records show China’s sailors discovered Huangyan Island 2,000 years ago and cite extensive records of visits, mapping expeditions and habitation of the shoal from the Song Dynasty (960-1279 AD) right through to the modern period.

To back up these arguments, China has also deployed some of its most advanced paramilitary patrol vessels to the shoal in a calibrated show of strength, for now keeping its increasingly powerful navy at a distance.

China’s Foreign Ministry responded on Wednesday that only 20 Chinese fishing boats were in the area, a normal number for this time of the year, and they were operating in accordance with Chinese law.

Maritime lawyers note Beijing routinely outlines the scope of its claims with reference to the so-called nine-dashed line that takes in about 90 percent of the 3.5 million square kilometer South China Sea on Chinese maps.

This vague boundary was first officially published on a map by China’s Nationalist government in 1947 and has been included in subsequent maps issued under Communist rule.

While Beijing has no difficulty in producing historical evidence to support its territorial links to many islands and reefs, less material is available to show how it arrived at the nine-dashed line.

In a September, 2008 U.S. diplomatic cable published by WikiLeaks, the U.S. Embassy in Beijing reported that a senior Chinese government maritime law expert, Yin Wenqiang, had “admitted” he was unaware of the historical basis for the nine dashes.

In a March, 2008 cable, the embassy reported that a senior Chinese diplomat, Zheng Zhenhua, had handed over a written statement when asked about the scope of this boundary.

Scarborough Shoal falls within the nine-dashed line, as do the Paracel and Spratly Islands, the two most important disputed island groups in the South China Sea.

LAW OF THE SEA TREATY

China insists it has sovereignty over both these groups but it has yet to specify how much of the rest of the territory within the nine-dashed line it intends to claim.

One reason suggested for this lack of clarity is that China, like all of the other claimants except Taiwan, is a signatory to the 1982 United Nations Convention on the Law of the Sea (UNCLOS).

If Beijing defined its claim to conform with the provisions of this treaty, it would almost certainly reduce the scope of Chinese territory and expose the government to criticism from vocal nationalists.

Alternatively, if Beijing was to maximise the extent of its claim to include all or most of the territory within the nine-dashed line, it would be difficult to justify under international law and antagonise its neighbours.

“Neither choice leads to a promising prospect,” said Sun. “Therefore sticking to the existing path is the most rational.”

This means that China is likely to remain vague, experts say, particularly during the current period of heightened political sensitivity ahead of a leadership transition scheduled for later this year.

However, this lack of clarity doesn’t mean China’s claims over South China Sea territory have less merit than other claimants, experts say.

In the case of Scarborough shoal, Beijing says the land is Chinese territory and the waters surrounding the shoal have been China’s traditional fishing grounds for generations.

“If China can demonstrate sovereignty, its claim is as good as the Philippines’.”

Under the provisions of UNCLOS, a nation with sovereignty over an island can claim a surrounding 12-nautical mile territorial sea.

UNCLOS defines an island as a natural land feature that remains above water at high tide. If the island is inhabitable, it is also entitled to an EEZ and possibly a continental shelf.

However, Beijing has not claimed a territorial sea or an EEZ from any of the features of Scarborough Shoal.

Most maritime experts doubt China will agree to have any claims over the South China Sea heard by the United Nation’s International Tribunal on the Law of the Sea (ITLOS), the body set up to rule on disputes.

Beijing’s policy is to negotiate on the joint exploitation of natural resources in contested areas but rival claimants are reluctant to accept this formula because it could be seen as recognition of China’s sovereignty.

They suggest Vietnam and the Philippines have already shown greater willingness to challenge China since the U.S. signalled a renewed interest in the region.

“They think they have the U.S. on side,” said Bateman.