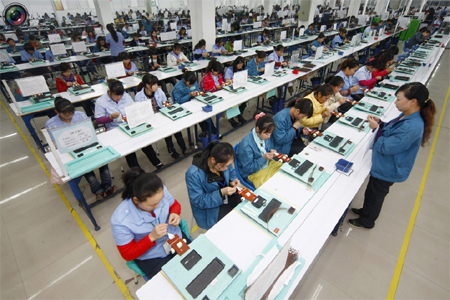 China‘s economy betrayed signs of a broadening slowdown as surveys of its vast factory sector showed momentum eased in May, signalling a deeper-than-forecast deterioration in demand at home and abroad and the likelihood of more policy easing.

The official purchasing managers’ index – covering China’s biggest, mainly state-backed firms – fell more than expected to 50.4 in May, the weakest reading this year and down from April’s 13-month high, with output at its lowest since November 2011.

The HSBC China manufacturing PMI, tracking smaller private sector firms, retreated to 48.4 from 49.3 in April – its seventh straight month below the 50-mark that demarcates expansion from contraction – with the employment sub-index falling to 48.1, its lowest level since March, 2009.

“Growth in Q2 is likely to slow, probably below 7.5 percent year-on-year. That puts the annual growth target at risk and the risks continue to increase because the external environment is weakening,” Dariusz Kowalczyk, senior economist and strategist at Credit Agricole CIB in Hong Kong, told Reuters.

“The government will still try to get by with targeted, selective measures like the cash for clunkers program, but we will get more monetary measures as well.”

The weakening of both index readings at a headline level is worrying for investors who see economic headwinds intensifying around the world and increasingly look for China – the biggest single provider of growth in the global economy – to pick up the slack.

The price of Brent crude oil fell towards $101 a barrel, the euro touched a fresh two-year low and share prices in Hong Kong and Australia fell in the wake of the data.

Although Beijing has announced a raft of reforms to support growth and unlock private investment since mid-May, it is too early for the PMI data to reflect those efforts.

A particular concern for economists was that new orders have begun to shrink while inventories have started to build, implying further softness in the months ahead as firms would meet any uptick in orders with production from existing stock, rather than increasing output.

Most worrisome for China’s ruling Communist Party is likely to be the employment risks. The Party is obsessed with maintaining stability ahead of a power transition that gets under way later this year, and in the past has intervened in the economy to preserve jobs and keep workers off the streets.

China’s annual economic growth is expected by analysts to fall to 7.9 percent in the second quarter, the first dip below 8 percent since 2009.

The latest Reuters benchmark poll has a consensus growth forecast of 8.2 percent for the full year, which would be the slowest annual expansion since 1999, and economists increasingly expect no meaningful increase in momentum until the second half of 2012.

“As we’ve said before, this will be no ‘V-shaped’ recovery – it will be shallow and volatile, fraught with the risk of policy error,” economists at IHS Global Insight said in a client note.

Although the official PMI in April was a 13-month high, economic data for the month was unexpectedly weak, alarming the central government as well as outside investors.

The National Bureau of Statistics downplayed the risk of a broader economic deterioration in a statement accompanying the official PMI index.

“The present short-term moderation in growth does not mean the Chinese economy is entering a new recession,” it said.

Many investors want China to unleash a massive new stimulus package that will allow them to bet on recovery plays.

Markets have gyrated wildly in recent weeks as speculation on stimulus has intensified, fuelled in part by government steps in the past two weeks to fast-track about 1 trillion yuan ($159 billion) in infrastructure and industrial projects.

A chorus of comment from influential academics in state-backed newspapers this week has also sought to play down expectations that any program would seek to replicate a 4 trillion yuan stimulus package unleashed during the 2008-09 global financial crisis.

That splurge left in its wake a 10.7 trillion yuan mountain of local government debt and helped push consumer price inflation to a three-year peak amid a frenzy of real estate speculation.

Beijing has only just brought inflation under control, helping explain why growth is being sacrificed in the short term. Analysts cite a two-year long program of property curbs as the main reason why China’s economic growth in 2012 will be the slowest since 1999.

In order to avoid a second build-up in local government debt, China will allow private capital to help finance many of these projects, particularly in rail and energy and natural gas distribution.

Meanwhile the central bank has cut 150 basis points (bps) from bank reserves – the required reserve ratio or RRR – in three moves since November 2011, bringing the rate down from a record high of 21.5 percent.

Analysts polled by Reuters in May, shortly after the latest cut, expected another 100 bps of cuts this year.

“China needs to stimulate more lending and they need to cut RRR further to achieve that and they will probably cut the lending rate after the May data is released later in June,” said Credit Agricole CIB’s Kowalczyk.