Fatality after Philippine boat rammed by Chinese vessel near shoal 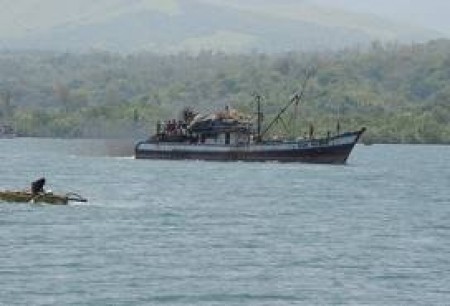 The fishing boat set out from the northern coastal town of Bolinao, in Pangasinan province, last Monday and was reported to have sunk two days later, Office of Civil Defence chief Benito Ramos said.

“Of the eight fishermen aboard, four were plucked out of the sea only yesterday, but one of them died in a hospital,” Ramos said.

The fishermen told authorities they believed the vessel that collided with their boat was Chinese, he said, but this could not be verified.

Zhang Hua, a spokesman for the Chinese embassy in Manila, said yesterday the embassy was still checking whether a clash had occurred.

Ramos said the incident occurred north of Scarborough Shoal, which China calls Huangyan Island, where the Philippines and China have been engaged in a tense stand-off since April.

Philippine President Benigno Aquino this month ordered two vessels to pull out from the shoal, citing bad weather, a move that China said calmed tensions in the area.

While China said it would also ask its fishermen to leave the area, it stressed it had no intention of pulling out its bigger ships. As of last week, there were still seven Chinese ships at the shoal, according to the Philippine foreign ministry.

Meanwhile, Philippine officials said they had opened a small kindergarten on a South China Sea island also claimed by China and four other governments. Opened on June 15, officials said it was to help a poor community on the island in the Spratly archipelago, not to antagonise rival claimants.