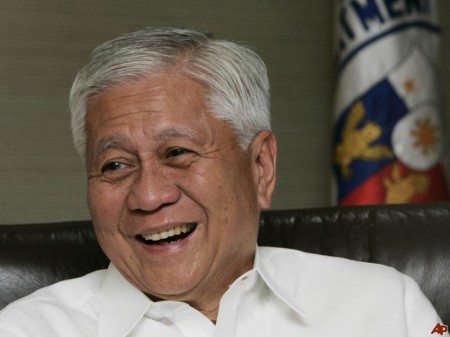 China has withdrawn its boats from the lagoon of a tiny South China Sea shoal following an agreement with the Philippines that at least temporarily eases the countries’ territorial dispute, officials in Manila said Monday.

The Philippine government pulled out its two vessels from Scarborough Shoal on June 15, and President Benigno Aquino III last week threatened to send them back unless China also withdrew.

Foreign Secretary Albert del Rosario said that he had received information that all boats had left the shoal’s lagoon as of Saturday. He said earlier that China and the Philippines had reached a verbal agreement to pull out from the lagoon. Department of Foreign Affairs spokesman Raul Hernandez later said an unspecified number of Chinese ships remained in the wider vicinity of the shoal.

Both countries claim the territory. Tensions flared in April when the Philippines accused Chinese fishermen of poaching within its exclusive economic zone, which includes the shoal. China responded by sending paramilitary vessels to protect the fishermen.

Chinese Foreign Ministry spokesman Hong Lei said at a regular briefing in Beijing that the situation at the Huangyan Islands — the Chinese name for Scarborough Shoal — “is overall toward peace.” He did not comment on the Philippines’ statement that Chinese vessels had withdrawn from the lagoon.

He said that Chinese vessels “have been running the … islands and the nearby waters and standing on alert.”

The horseshoe-shaped shoal, a popular hunting ground for Filipino and Chinese fishermen, is one of the hundreds of tiny outcrops and islands dotting the South China Sea, one of the world’s busiest shipping lanes and an area believed to be rich in natural gas and oil.

China, the Philippines, Taiwan, Brunei, Malaysia and Vietnam claim the nearby Spratly Islands, where disputes have occasionally triggered naval clashes. A nonbinding 2002 accord discourages aggressive acts that could spark fighting.

On Philippine-controlled Pag-asa Island, Mayor Eugenio Bito-onon announced Sunday the opening of a small kindergarten for a tiny community of Filipino settlers. In Beijing, Lei responded to the kindergarten by saying that his government opposed “any action that violates China’s jurisdiction.”

“We hope relevant countries comply with the laws and do not engage in acts that will aggravate the South China Sea tension,” he said.

The United States, meanwhile, dispatched a nuclear-powered submarine to the former U.S. base at Subic in the northwestern Philippines facing the South China Sea.

The American Embassy in Manila said the USS Louisville was making a routine port call to highlight historic and military relations with the Philippines. It was the second publicly announced visit of a U.S. submarine in recent months amid the tensions between China and the Philippines, as Manila turns to Washington for military aid.