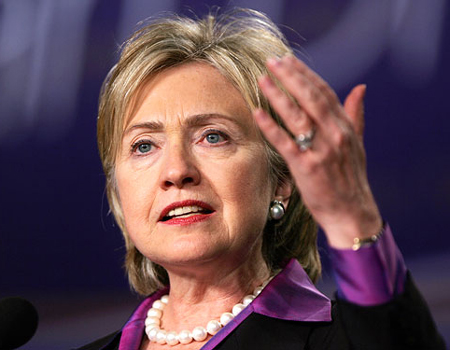 SCMP says, according to Reuters report from Beijing, “China‘s top newspaper slammed US Secretary of State Hillary Clinton on Thursday for comments she made lauding democracy and implicitly criticising restrictions in China, saying those Asian countries that ape US democracy were doomed to fail.

“Earlier this week, Clinton held up Mongolia’s sometimes messy politics as a democratic model for Asia. While she did not directly name China, her comments appeared aimed partly at Beijing.”

The report says, “In China’s first response to her remarks, ruling Communist Party mouthpiece the People’s Daily said Clinton was acting as a ‘preacher for human rights’ by praising certain countries to obliquely attack China.”

People’s Daily said that Asian countries were now booming, unlike Western countries stuck in the morass of economic crisis, proving they could go down “a path different from the West and create political systems which suit their national characteristics.”

It is interesting to me that the US is frank to admit its economic problems, but does not seem to find a way to resolve the problems; while China, though well aware of its problems of rule of law and human rights and is making efforts in those respects, is not frank to admit that in the world for fear of the damage it may do to its image at home and abroad.

As I am not familiar with the US, I am not able to really point out any way for improvement of the US economy, but I have seen something ridiculous in American politics from the view point of a stranger. I will write about it later.

If the two parties in America had been for the people, they might have cooperated closely in doing lots of good for the people, instead of fighting against each other to prevent each other from achieving much. Medicare is a good example. It has been so difficult that decades of efforts were made in vain until now, but now a party wants to quash what has been achieved. It uses the excuse of people are “taxed” for it.

Even if it is a tax, people have to be taxed for the benefits they enjoy. While America has been making efforts in vain, other countries have been able to have medical welfare for their peoples for a long time. Even China has now medical insurance covering over 95% of its population. Certainly, people have to pay for the insurance. The most important point is that such insurance is affordable for the people.

On the other hand, Obama has proved incompetent to improve US economy and provide jobs for American people in spite of his efforts in those respects for re-election, but for the interests of their Party, no Democrat asks Obama to resign but it seems all Democrats support Obama for winning another term. I really do not understand American politics.