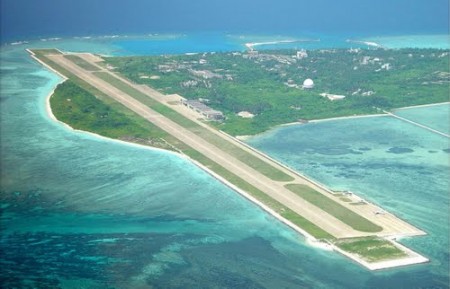 Hong Kong Ming Pao’s reporter has recently been on Yongxing Island and found that the island is under strict military control due to the rising tensions in the South China Sea.

The reporter says the scenery on the island is wonderful, but as it is the biggest island and the most important military base on the South China Sea, it is heavily guarded and most of it has been put under strict military control.

Tourists from outside are not allowed to enter military zones, go into the water, take photographs or video records, or make any measurement or drawing. PLA officers and soldiers are patrolling the island and will check tourists’ cameras at any time.

If anything suspicious is found, the tourist is required to delete it at once. If the case is serious, it will be handed over to the upper level, and the tourist may be forced to leave the island. This shows that the disputes over sovereignty with neighbouring countries have become the greatest obstacle to the commercial development of the island.

Yongxing Island lies more than 300 kilometres to the southeast of Hainan Island. It has an area of only 2 square kilometres, but is already the greatest island in the South China Sea. There is an airport with a runway built by reclamation for airplanes as big as a Boeing 737, but usually only navy transport aircrafts and fighters are used. The areas where tourists may stay are the area around a dock and a fishing village for half a day’s tour.

In order to meet the needs for future development, its new port is being expanded. In the port there is China’s Fishery administration Ship No. 306 that conducted a patrol in Huangyan Island area at the end of last month.

There are records about the island in the documents of various dynasties in Chinese history. The island was occupied by Japan in last century but recovered by China in 1946 and became China’s military base. In 1974, China defeated South Vietnam in a naval battle and controlled the entire Xisha Islands, but disputes between China and Vietnam has not ended.

The reporter saw a Vietnamese fishing boat at the dock when he was on the island. It is said that the boat was detained by the fishery administration authority more than a year ago, but remained there as nobody in Vietnam came to reclaim it.

Fresh water for daily use comes from desalination and rain water supplemented by some shipped from Hainan Island. There are some wells, but as they are easily contaminated by sea water, the water from them is used for washing instead of drinking.

As the State Council decided on June 21 to set up Sansha City with Yongxing Island as its capital, it is expected that state leaders will come to take part in the establishment ceremony. It has been decided that Sansha City People’s Congress will be established with 60 deputies directly elected from permanent residents. The Congress will elect the mayor, deputy mayor, chief judge and chief procurator.

Sansha City will govern over 2 million square kilometres of the South China Sea area, including all the islands there with a total land area of 13 square kilometres. There are 1,000 permanent residents consisting of fishermen and the workers stationed on the islands.

It is a prefecture-level city in China with the smallest population and land area but the largest sea area and is located on the frontier of marine surveillance, fishery administration and oceanic scientific research.

Like Loading...
‹ The grievances of Chinese farmers; an endless story
China steps up building military facilities on Nansha Islands ›