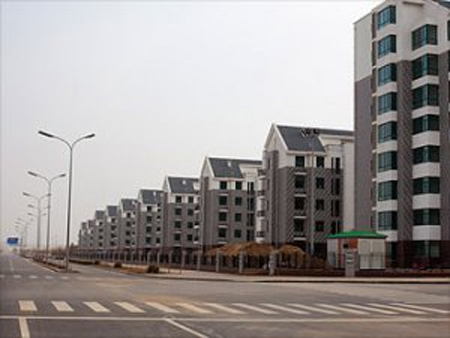 As the Chinese economy continues to slow there is a growing consensus additional stimulus packages are forthcoming. What will be interesting to see is the exact nature of any new stimulus the central government enacts? Will it be focused again on infrastructure building at the local and provincial level? Will it be construction centric like the last stimulus? What would be the best place for the Central government to spend trillions of RMB?

The original stimulus covered many programs all with two key aspects. The first key aspect was all of loans guaranteed by the Central government for infrastructure building in municipalities and townships. The second key aspect was Central government direct infrastructure improvements such as high-speed rail. In combination these investments played a great part in keeping China out of recession and resuming enviable growth. Many out of work migrants recently returned from the coastal areas were successfully put back to the work in the interior building many of these infrastructure projects.

In addition to providing needed jobs in general, and jobs in the less developed interior of China, the stimulus catapulted China to the top of many lists in the world. China now has the largest infrastructure on the planet to move goods and people. China now has the most ports of any country on the planet, six of the ten largest ports by TEU’s (not including HK), and seven of the ten largest by tonnage. China has surpassed the US with the largest interstate expressway system in the world by miles of road. In addition, China has by far the world’s largest rail and high-speed rail system in the world by miles of track. One of the only areas that china has not surpassed the rest of the world is in total number of airports. This number seems out-of-place until one realizes the airports in Beijing and Shanghai have the capacity (currently under utilized) to become the number one and two airports in the world.

In addition to building the above types of infrastructure China embarked on a massive building of condos/apartments, commercial building sites and economic development zones (EDZ). This spectacle of construction has helped observers coin the term ghost city. These ghost cities have been in and out of the news since 2008. Completely empty cities built-in China, Mongolia, and Africa have been the object of ridicule, derision, and all sorts of outlandish theories. This phenomenon has typically been reported in the media as a direct result of the 2008 to 2010 economic stimulus in China. Unfortunately this supposition lacks historical deference and oversimplified what has really happened.

The building of cities, economic development zones, and urban infrastructure with no current or immediately anticipated tenants is not a new theme in Chinese economics. I can personally attest this phenomenon has existed since 1996 and the 2008-2010 stimulus has only changed the size, scope, and timing of these newer renditions. When I arrived in Changchun in 1996 they were just starting to sell the idea of the “southern” high tech development zone in the city. This zone started across the street from where I taught at Changchun University. At the time Changchun University was the southern most point of the urban area of Changchun. Yet there I was in meeting after meeting being pitched on this idea of a massive EDZ where nothing, not even roads, currently existed.

At this same time the EDZ in Pudong Shanghai began to take shape. In my first trip to Shanghai in 1997 I can say that nothing except the CCTV existed in Pudong. Since then I have attended hundreds of presentations for new “villages”, “resorts”, and EDZ’s among other ideas. Well over 90% of these presentations had plans for areas that were completely uninhabited with no infrastructure at the time. Regardless of this fact local governments would build, phase-by-phase, infrastructure including roads, electricity and water to help bring in investment. There has been a fair share of these plans that have never proceeded past the initial phase of construction. Yet there are thousands of instances where the end result equals or exceeds the original plans.

The difference in these modern ghost cities is the completion of these projects with no gradual build up. Rather than rolling out each phase as more and more investment rolled into the region, many local governments completed their projects in one step. The idea being that the build it and they will come model of development had worked previously (albeit in phases), why not in 100% completed form? I for one do not doubt that some of this new ghost infrastructure will go to waste. I also firmly believe the vast majority will fill up over time. This leads me back to the main point of what China should do with any new potential stimulus plans.

In my opinion the apparent glut of infrastructure building between 2008 and 2010 will prove economically successful with a lasting positive impact. In this assessment I am not overlooking the huge build up in non-performing loans in the Chinese banking sector. I am saying that over the next ten years or so the value of these projects will outweigh the negative consequences. However, China would be foolish to try to get another drop out of this well. Any attempt at further stimulus via construction and logistics infrastructure would lead to massive inflation and a property bubble of unforeseen proportions. The only place this would not be true would be in improvements of areas such as water treatment and sewer lines (Beijing apparently does not possess enough sewer lines and storm drains as evidenced by this summers floods).

Investment in cleaning up the environment, green energy, healthcare, lessening the power and size of the grey economy, and improving food and product safety would all reap immediate benefits.  The announcement in China of $2.2 billion to spur purchases of new more energy-efficient electronics is the type of program that would see a greater return. This type of package promotes internal production and consumption on the open market with credits to stimulate these purchases. If successful the program will save over 31 billion kilowatt-hours of energy per year.

Like Loading...
‹ Will China arm its fishermen to protect a ‘core interest’?
US lawmakers blame China over maritime disputes ›