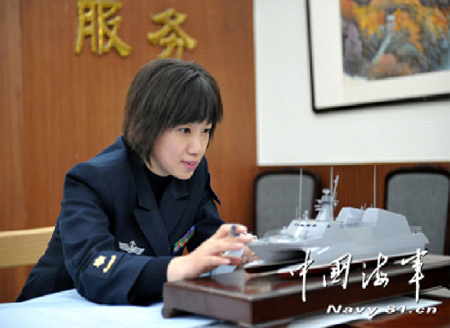 She may be 40 now, but still looks young in photos.

However, nearly 2 decades ago in 1994, she was assigned chief designer of China’s well-known Houbei Class fast attack missile boat.

At that time, she was the youngest chief designer ever in China.

There are now three flotillas of more than 80 such boats in Chinese navy.

According to a retired US navy officer, the boat is a purebred ship killer, perhaps even a carrier killer.

When she was appointed, fast boats seemed outdated.

Perhaps, that was the reason to entrust a young girl the design of a new type of it, though she had already made prominent achievements in fundamental research.

Through 8 years of hard work, she finally succeeded in developing a very advanced fast stealth boat able to operate on the high sea.

She won a PLA scientific and technology progress award for that in 2002.

When she was asked in a recent interview why she was always happy in the company of lonely data and silent drawings, she said, “A career will give you enjoyment and happiness if you really love it and do it with thorough dedication.”

Perhaps because of her dedication, over the past 5 years, she has been in charge of 50 research projects, and completed over 50 research reports and 18 research treatises.