“Tombstone” looks at China’s famine of the mid-1900s; the Great Leap Forward 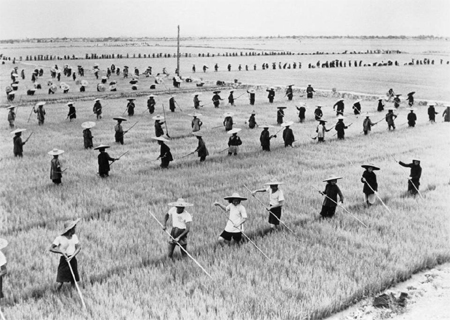 Mao’s Great Leap Forward, designed to make China the world’s leading communist state, generated the worst famine in history. Until recently, the West knew little about the causes and size of the disaster, which killed tens of millions in four years.

The worst famine in history

As a veteran Chinese journalist, Yang Jisheng recounts in his book “Tombstone” how for decades officials blamed “natural calamity” for the massive population loss; references were made to epidemics, “and no mention of starvation was allowed.” Yang has conducted a sweeping investigation and amassed information from dozens of archives to produce a comprehensive history of the Great Chinese Famine. He intended his book as a monument to the millions of victims, including his own father.

The original two-volume version of “Tombstone,’’ double the size of the English edition, appeared in 2008 in Hong Kong and has already run to eight printings. The book is banned in mainland China where no full famine account has ever been published, “an offence to the memories of tens of millions,” writes Yang.

As with Joseph Stalin’s gulag, the total number of deaths is impossible to know accurately. Yang, who analysed the Western and Chinese research, provides an estimate – 36 million – and tells an astounding story behind the statistics. As a Communist Party member, employed for decades at the Xinhua News Agency, Yang brings his insider knowledge of the authoritarian system and gives voice to the victims, having interviewed survivors and journalists who saw the events.

In spring 1959, one year into the Great Leap Forward, designed to overtake the major economies of England and the United States, Yang, then a student, received news that his father was starving to death. Back in his home village, he saw devastation he would never forget: elm trees stood stripped of bark, used for food. Like most Chinese, Yang had no grasp of the extent of the calamity and believed his village an isolated case. Awakening came after the 1989 Beijing massacre, when Yang began his research into the causes of the famine.

An admirer of Stalin, Mao imposed collectivisation and industrialisation on backward China, emphasising high production targets and speed. But unlike Stalin, he mobilised peasants to work in both agriculture and industry, turning the entire country into a vast gulag. Millions of private farms across China were forcibly consolidated into gigantic communes, the state seizing private land and assets without compensation; opponents were beaten and killed. Private property was seen as an impediment to communism; about 40 percent of all housing was destroyed. The regime sanctioned an unprecedented persecution of peasants across China, their lives sacrificed to unworkable goals dictated by the supreme leader.

The masses are slaves

“The masses are slaves,” a party cadre was quoted as saying, “and they won’t do anything unless beaten, berated, or deprived of food.” Local cadres had unlimited power to rape, ransack homes, deny food, beat and kill those who stole out of hunger or those not blindly obeying. The draconian system generated waste and destruction. Peasants received inflexible commands about the ploughing depth for seeding and planting density, directives that lead to crop failure.

Mao promoted people’s communes, which allowed for an extraordinary concentration of state power. By putting every aspect of peasant lives under the party’s control the system created the conditions for the famine. By the end of 1958, 90 percent of the rural population was forced to take meals in communal canteens; cooking implements were confiscated. When supplies ran out and kitchens closed, peasants were left without the means to survive.

Unrealistically high production targets and procurement quotas were the key elements that generated the famine. Faced with political pressure, the cadres exaggerated crop yields. When the myth of peasants hiding grain was created, army detachments were sent to extort every kernel.

At the Lushan Conference of 1959 Mao was made aware that his economic policies had “descended into chaos,” causing starvation. Instead of changing direction, Mao defeated “the anti-party clique” and purged his prominent critic, China’s defence minister Peng Duhai. After the conference Mao’s policies were intensified, extending the impact of the Great Famine.

Party secretaries never travelled to the countryside where desperation was total and cannibalism rampant. To cover up evidence of the famine local cadres had mass graves stomped flat and crops planted on top. With millions dying, the cadres entertained at lavish feasts and had meals delivered to luxury hotels. Survivors remember: “We were swollen with starvation, while the cadres were swollen with overeating.” Officials responsible for millions of deaths were merely transferred to other bureaucracies — unfairly, as some of them judged, since they merely acted on party orders.

Yang’s book can be compared with Solzhenitsyn’s “The Gulag Archipelago,” since its evidence was also bravely collected under Communism with the goal of helping dismantle the totalitarian system that had sanctioned mass killings. This system has outlived itself, writes Yang, who believes China should disavow its Communist ideals and erect memorials to the victims of the Great Famine.

Like Loading...
‹ US recognises Arunachal Pradesh as part of India, not China
China: Knifeman in Henan attacks primary school children ›