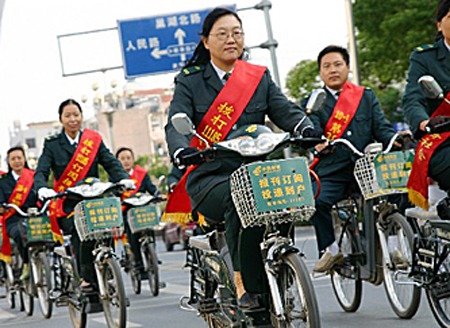 In winter 2001, a group of Chinese visited my school, the Moody Bible Institute in Chicago. Their goal was to learn about America. I was invited on the strict agreement that I would say nothing inciting. So, being my natural, diplomatic self, popped the question, “So, what do you think about our spy plane crashing in your country?” My friend’s head sank into his lap.

After a repartee that would have left the French wanting for harsher words, we shook hands in friendship. Somewhere, along the course of our dinner conversation, I explained, “Claiming 200 miles off the coast of China makes the rest of the world think you want to own the entire ocean.” It seemed like a new concept to the man.

When I shared that perception with him—that vast ocean claims are seen by the rest of the world as an intention of claiming all of the oceans—I merely wanted the man to understand how others perceive him, his nation, and their actions.

Everyone is perceived by someone. A husband has his opinion of what he does, while his wife often thinks differently. He thinks he has a good time with his friends. His wife thinks he got home too late. Other people have opinions about what we do—right or wrong, other people have their own perceptions, and misperceptions, about each of us.

Honestly, I never expected to hear those words again. But recently, I read that the Chairman of International Affairs at Shanghai’s Fudan University is explaining the same kind of perception—that China wants to own all seven seas. Did he first get that idea from me? Or are we merely two different people in two different decades who happen to view Beijing’s policy as unchanging?

Regardless, Beijing needs to consider the facts: This perception is held by many more people than the Chairman and myself. In my opinion, it’s not a misperception, it seems like a very accurate perception—that China wants to own all of the oceans, and the South China Sea is merely the beginning. Another, more important perception is that Beijing is either unaware that other people even have opinions about them or Beijing simply doesn’t care.

China could be a world leader, but not without understanding that there is a world to perceive them. In the famous words of John C. Maxwell, “He who thinketh he leadeth and hath no one following him is only taking a walk.”

China is rich with potential. They implemented freedom in their economy and it flourished. They disallowed unregistered institutional religion in their country and the underground Church eventually gained Beijing’s respect for being law-abiding citizens—as well as respect from America’s faltering above-ground, heavily institutional Church. Now, Beijing only needs to learn that alliances are more valuable than acquisitions and winning friends is less costly than winning wars.

Many American Christians who have contact with Chinese-American culture teach that China’s pride culture cannot change. But I believe it can. I’ve seen it change, right here in Asia. When I read headlines like these, I don’t get angry. Instead, I just shake my head and say, Why? What will it take? Beijing will learn, but what will it take?

Like Loading...
‹ China: KFC chickens are being fattened with illegal drugs
The impacts of the China/Japan island dispute ›