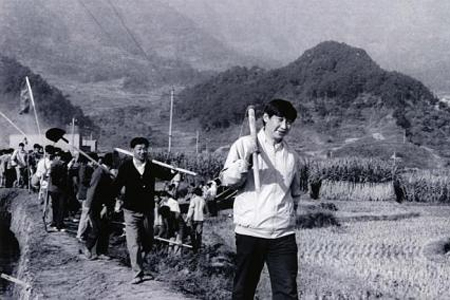 A picture taken in 1988 shows a young Mr Xi (above), then the secretary of the Ningde Prefecture Committee of the Communist Party, participating in farm work during a visit to the countryside in Fujian province

China’s top two leaders have revealed photographs and details of their families, breaking a long-held taboo where such information is considered a state secret.

It also carried lengthy profiles that chronicled their careers from early grassroots days up to their recent activities since taking over the helm of the Communist Party last month.

But what struck observers most was the information on the pair’s families, including what is believed to be the first mention in state media of the name of Xi’s daughter.

An article titled “Man of the people, statesman of vision“ on Xi, 59, published the names of his folk singer-wife Peng Liyuan and their daughter.

Wrote the Xinhua report: “The couple has a daughter named Xi Mingze, whom they hope will live an honest life and make a contribution to society.”

Among the 23 photos released of the Xi family was one showing the couple’s only child sitting on the back of a bicycle ridden by her father. The photo was taken while he was party chief of Fuzhou, capital of the southern Fujian province, in the early 1990s.

For Li, 57, the Xinhua article titled “A man who puts people first” named his wife as Cheng Hong, an English professor at the Capital University of Economics and Business. It also said the couple have one daughter but did not give her name. The girl reportedly graduated from Peking University and is studying medicine in the United States.

Details of Li’s family were more scant than Xi’s, and the 17 photos did not include any of the incoming premier’s family members.

Observers say the move is chiefly designed to endear the high-powered duo to the people by depicting them as ordinary men.

Peking University analyst Zhang Jian said: “The purpose is to portray them as fan ren (mere mortal in Mandarin), which will help them draw closer to the people.”

Such publicity efforts are also deemed significant as they were not carried out by previous top leaders, he added.

The move, say observers, could also be aimed at quelling rising discontent over rampant corruption, especially towards the political elite and the alleged wealth of their family members.

Two investigative reports on the finances of Xi’s family members and that of outgoing Premier Wen Jiabao have stirred unhappiness too.

But analysts say questions remain over the real impact of the efforts by Xi and Li.

Said Dr Chen of the East Asian Institute: “Xi and Li want others to be as open with their family backgrounds, and in turn compel them to discipline their families and relatives more strictly.

“But both will face obstacles because since it’s not a tradition, other top leaders will see no need to follow suit.”

Like Loading...
‹ China set to surpass US in R&D spending in 10 years
China: Xi learns from Castro and Putin in graft fight ›