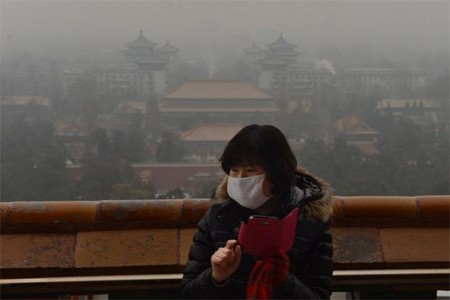 Japan and China have in recent weeks engaged in an unnerving game of aerial cat and mouse, scrambling fighter jets against each over contested airspace, and Japan accusing China of locking weapon-guiding radar against a Japanese helicopter—a claim China denies.

Now comes a new spat, with Japanese officials and media suggesting China’s latest air-pollution crisis may be spreading across the East China Sea into Japan.

Japan’s Environment Ministry announced Friday emergency measures to combat the rise in levels of an air pollutant dubbed “PM2.5.” Japanese TV stations Friday were splashing headlines linking the rise to the high levels observed in China last month. The Japanese government has asked for the Chinese government’s cooperation in observing and testing for the cause of the rising levels of the particle, as well as for its effects on the human body.

The Japanese reports drew some harsh responses from China.  One critic was quoted as saying: “After the earthquake, Japan switched from nuclear power to coal fired power, and has been incinerating their waste. This has greatly affected China’s environment, so one cannot criticize only China. The pollution needs to be reduced, but we cannot ignore climate change and neighboring countries.”

Another critic said: “China should admit the relationship between high levels of PM2.5 surpassing those of Japan and the air pollution in northern China. However, we mustn’t forget that the pollution is the result of Japanese companies’ manufacturing operations in China.”

The Japanese government plans to send a team of doctors to Beijing to conduct medical examinations on Japanese residents.