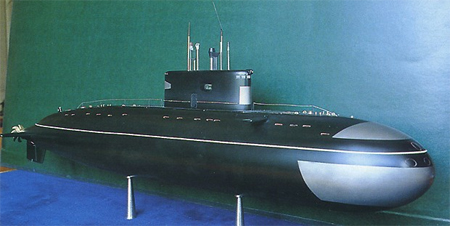 According to Russian Foreign TV News Net’s report on March 5, Japan’s Mainichi Shimbun believed the Taiwan military’s allegation that Mainland China has entered into a contract with Russia on the purchase of Amur-class (the export version of Lada-class) diesel-electric submarines.

It is a part of China’s plan to achieve modernisation of its troops and build up a marine superpower and aims at countering US aircraft carriers and preventing them from interfering with Taiwan affairs.

Japan’s Mainichi Shimbun pointed out: the Russian Lada-class submarine is an upgraded version of the Kilo-class ones, which are well-known for their extremely low noise. China will import four export-version Lada-class submarines, of which two will be build in Russia while the other two, in China. It is expected that a submarine supply agreement that really meets the requirements will not be concluded for two to three years.

Having been certain that China-made Type 041 Yuan-class submarines generate too loud a noise, China has decided to order Russia’s new-type submarines. It is said that in 2004, China successfully developed its Yuan-class submarines on the basis of imported technology of Kilo-class submarine and has vigorously used such submarines in its military drills over the past 5 years. However, due to relatively loud noise, the submarines have been discovered and recorded by US military’s SONAR and radar system.

The Japanese media believed: China is drafting a strategy to protect the nation and prevent enemy invasion across the first island chain, including the Japanese Archipelago, Taiwan and the Philippines. For that purpose, China plans to use guided missiles and submarines. In case of potential emergence of conflict in the Taiwan Strait, under specific circumstances, China could prevent the US from interfering with China’s internal affairs.