China uses copycat architecture to modernise, define and celebrate itself 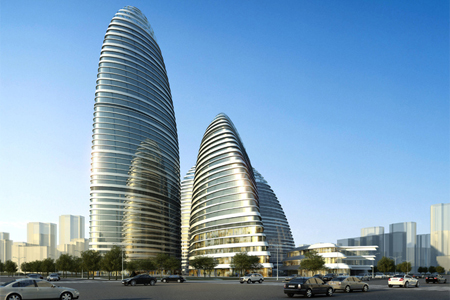 Throughout history, civilisations have copied, borrowed and shared architectural styles.

London‘s St. Paul’s Cathedral and the United States Capitol dome are both modelled after the Pantheon in Rome. Chicago’s Tribune Tower takes from the Gothic design of Rouen Cathedral in France.

Now, the Chinese are copying the most iconic cities and towns of the West at an unprecedented scale and speed.

China‘s rapid urbanisation has fuelled an enormous building boom. According to the Economist Intelligence Unit, China has built housing equivalent to roughly two Spain from 2000 to 2010. Stepping into cities like Hangzhou, Shanghai or Beijing, one might mistake neighbourhoods for Venice, Paris or London. While copying architectural styles is as old as architecture itself, China has done it on an unprecedented scale and speed.

“We’re almost in a paper mache of something you see in New England,” said Jeff Layman, who lives with his wife Fumiyo and their two children in a single-family, three-story house with a driveway in Lane Bridge, a residential community in Beijing.

While some of the older houses ostensibly resemble American suburbia, the Layman family said the quality of the construction material is sub-par and the infrastructure of public utilities is poor.

Shanghai has built nine suburban towns in various European styles as a part of the city’s “One City, Nine Towns” initiative.

Bianca Bosker, an American journalist and author of “Original Copies: Architectural Mimicry in Contemporary China,” a book on Chinese copycat architecture, visited these nine towns. At Thames Town, one of the “nine towns” in Shanghai, she was struck by the brick-by-brick resemblance to buildings in Britain. Bosker toured many of China’s copycat communities in an effort to understand why a country with its own rich architectural history is turning to the West in their urbanisation efforts.

“In recreating Paris, China is not paying homage to France. China is celebrating China,” she said. China’s building of the Eiffel Tower, the Empire State Building and the canals of Venice is a way of showing off its technical prowess and affluence to the world.

“There’s something very powerful about China’s metaphor of being able to rearrange the world order as they see fit, putting Amsterdam next to D.C.,” said Bosker.

But beneath China’s aesthetic desire to look like the West is a very real need to accommodate rapid urbanisation and mature into its modern architectural styles.

“What’s happening in Shanghai is seen as a desire to manage rapid growth,” said Jonathan Solomon, associate dean of Syracuse University’s architecture school. “One can call it copycat, or one can call it an honest attempt for good town planning principles.”

China under Communist dictator Mao Zedong in the mid-1900s prioritised the countryside over the city centre and looked to Soviet architecture, which consisted mainly of blocks of high-rise buildings. After China’s economy opened up in the 1990s, there was an effort to demonstrate that the country had modernized, which manifested through architecture.

“If you look at the official mandate for One City, Nine Towns, one thing listed as priority is learning from the West, learning how to house people and create towns by studying what they’ve done abroad,” said Bosker.

The concept of a suburb is new

China classifies all of its residents as either urban or rural. The concept of a suburb is new, and according to Solomon, the question of what Chinese suburbs should be is not fully answered.

Although they live in a gated Westernised community, the laymans understand they live in a developing country struggling to house its expanding urban population.

“It’s not like a suburb out of California or Chicago,” said Fumiyo Layman. “There’s no standard municipal services. Sometimes we would run out of hot water for days.”

According to Solomon, Fumiyo’s frustrations are part of China’s greater urbanisation problems. The country has to figure out how to move 22 to 30 million people around the city, keep air and water clean, prevent flooding and desertification and provide social services. To accomplish this in the fastest manner possible, China used Western models that best serve development.

“China looked for imitation rather than innovation in the period of trying to quickly find a way of adapting to the market and urban design challenges,” said Bosker.

China’s architectural replication can be seen as a part of a larger process to modernise and grow into its own models. Solomon sees this trend and feels hopeful.

“I have hope that this…pollination between cultures will lead to development of contemporary Chinese styles,” said Solomon.

Video: Bianca Bosker, author of “Original Copies: Architectural Mimicry in Contemporary China,” discusses how the Chinese are copying the most iconic cities and towns of the West.

Like Loading...
‹ China’s city of the future may include the “farmscraper”
China parliament delegates speak out against corruption, red tape ›