China’s city of the future may include the “farmscraper” 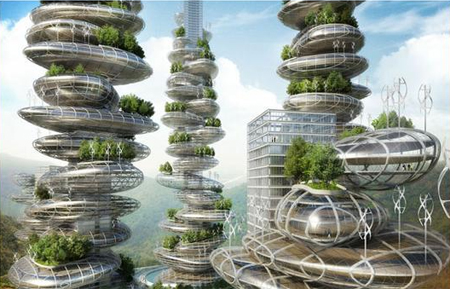 Architects are often pushing the boundaries of the possible, often in response to challenges posed by the ongoing problems of urban sprawl, pollution, and overpopulation.

And in China, where one-fifth of the world’s total population lives and urban population density reaches into the thousands per square kilometre, forward-looking architects are finding a receptive audience.

Consider for example the case of Shenzen, a city of 10,357,938 people located just north of Hong Kong. As part of the larger urban mass known as the Pearl River Megalopolis, which contains 120,000,000 people at a density of 3047 people per square kilometre, concerns over overpopulation and urban sprawl are pretty grave indeed.

Especially when one considers that the total number of people living in China’s cities outnumbers that living in rural areas and an additional 800 million people are expected to make the transition from rural to city living by the end of this decade.

Hence why the Chinese government is entertaining concepts for future cities from a number of sources, the most recent being that proposed by the firm of Vincent Callebaut Architectures. Known as “Asian Cairns”, this Shenzen-inspired design incorporates vertical architecture, vertical farming and sustainable living, culminating in a concept known as a “farmscraper“.

The selection of this city as their source of inspiration was no accident, as it is essentially a microcosm for what is happening all over China. Since Deng Xiaoping launched his program of reform and opening over thirty years ago, Shenzen has transformed more than any other city in the country. In the late 70’s, the city was mostly farmland, but has since turned into an urban landscape filled with skyscrapers and high-rise apartments.

To deal with the problem of further growth and migrations to the cities, the architects at Vincent Callebaut have proposed a “green, dense, smart city connected by the TIC (total integrated communication) and eco-designed from biotechnologies.”

Viewed from an external vantage point, the city they are proposing looks like a series of stacked pebbles that are largely transparent, accommodating vast green spaces and farmscapes.

Each tower will be self-sufficient, providing for its own power needs through the extensive use of photovoltaic and photo thermal solar cells, large forests of axial wind turbines and biofuel cells.

In terms of food production, every pebble will contain its own share of suspended orchards and vegetable gardens which will be irrigated thanks to recycled water and get plenty of sunshine thanks to the transparent domes and open roof segments.

A central transportation and communication system will also ensure a serious drop in carbon emissions, guaranteeing that the city will be sustainable and eco-friendly in the long run.

Given health concerns in China’s modern cities, where hundreds of thousands of deaths are attributed to respiratory illness through exposure to pollutants, and population growth is outstripping food production, ecologies such as the “Chinese Cairns” are likely to become the mainstay of urban planning.

In addition to the Pearl River Delta, there are also the megalopolitan regions of the Yangze River Delta, where an estimated 105,000,000 people live at a concentration of 2,700 inhabitants/km²; and the Bohai Economic Rim with 66,400,000 people that includes the capitol region of Beijing.

In time, these areas are also likely to see their own share of proposed self-sufficient cities, places where several hundred thousand people can live, work, eat and grow without fear of contracting lung cancer or leaving a massive carbon footprint.