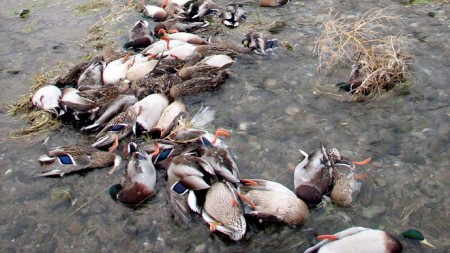 Much like the 16,000 dead pigs found floating in a different part of the river, the discovery of over 1000 dead ducks in the Nanhe has raised some serious questions. Foremost amongst them is how they died and why they were in the river in the first place.

According to the Agence Free Press, the ducks were fished out of the river and disinfected before being “buried in plastic bags three meters underground“. Though the Chinese government has not yet offered any explanation for the matter, it was quick to  declare that the local water is now safe to drink in the hopes of allaying public fears.

However, as The Guardian noted earlier this week, the hogs may have been a consequence of the Chinese government attempting to better manage livestock practices in its rapidly-growing meat industry. Until recently, illegal butcher shops would buy dead pigs from farmers on the cheap, but after the government cracked down on the practice, farmers apparently began dumping deceased pigs in the river.

No telling if the same factors are at work here, but with China hoping to improve standards for feeding its massive and rapidly growing urban population, the discovery of so much discarded livestock may be one of several unintended consequences. But of course, these concerns are dwarfed by the serious and ongoing problem of rivers becoming contaminated by runoff from livestock waste and manure.

For example, in Pinghu, which borders the Shanghai district of Jinshan, the problem of water quality caused by farming pollution is a grave concern. “The dead pigs weren’t a big problem in the past, it was pollution from the farming,” said Wang Yubing, deputy at the Pinghu Environmental Protection Bureau. Being upriver from the city, the pollution of pig farms pose a major danger to water quality in Shanghai.

While visiting the city, Xu Luzhong, an inspector with the Zhejiang environmental authorities, indicated that “The biggest pollution problem for Shaoxing is poultry and livestock farming.” Yu Hongwei, deputy of the city’s environmental bureau, added that “There are 130,000 farmers raising over 7 million pigs. Each pig excretes as much as 6 or 7 adult humans.” When all that is considered, the appearance of dead livestock suddenly seems like less of an concern and more like a symptom of a much larger problem.

Especially when one considers that China’s largest mega cities – such as those those that occupy the Pearl River Delta and the Yangtze River Delta – are all downriver from many major agricultural operations. Add to that the burdens of sanitation, chemical fertilizers, and industrial pollutants associated with all the interior’s inhabitants, a much more stark picture becomes clear.

But such are the hazards of living in modern China, where a massive urban expansion is forced to contend with a still-massive rural population, and where a rapidly expanding industrial base is having an indelible impact on the agricultural and meat industries.