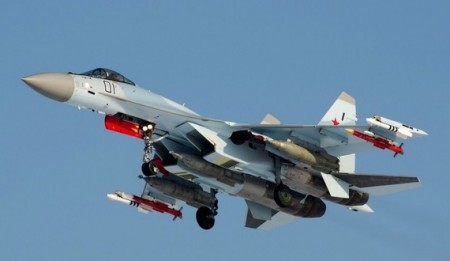 There have been reports that the Russian military worries that providing China with advanced weapons may threaten Russian security.

However, Russian President Vladimir Putin insists that there should be the arms deals. Why? For the sake of Sino-Russian Cold War partnership against the US.

China’s Chinese Communist Party (CCP) autocracy and Russian Putin autocracies may in essence support each other while the US pivot to Asia constitutes a threat to both China and Russia.

Influential US Sixty Minutes Plus’s support in its recent report for Russian youngsters’ opposition to Putin’s autocracy is a clear example of the US people’s mindset. As a democracy, the US government has to obey the people’s will and the media can be dominant.

Chinese government’s mouthpiece huanqiu.com reflects the situation well in its report “Insider story of China’s purchase of Su-35 fighter, Radar and engine are the keys” on March 28.

It says Canada’s Kanwa Defense monthly publishes an article in its April issue (published ahead of schedule) titled “Russia and China Signed Su-35 Purchase Deal.” The following are excerpts from the article:

The journal quotes top management of the Russian military industry as saying that Russia and China have signed the “Confirmation Agreement on the Purchase of Su-35 Multipurpose Fighters.” It is not a formal purchase agreement, but the smooth implementation of the agreement means great progress in the Sino-Russian relationship as strategic partners.

An authoritative source confirms that the number of purchases in the agreement is 24 and China does not request any technological transfer, including 117S engines.

Informed sources say that China hopes to purchase the Su-35 because the IRBIS-E passive phase array radar and 117S engine Su-35 uses are the most advanced equipment in the world.”

That was the first time that the most authoritative Russian military industry top management confirmed that Sino-Russian military cooperation would be greatly enhanced and regarded the purchase of Su-35 as a new wave of purchase.

The source says: “At present, there are talks on specific technological details and prices; therefore, we have to prepare a formal contract, which maybe will be signed at the end of 2013. Intensive talks are being carried out mainly on what weapon system China needs.”

The journal’s analysts believe there is a fairly great possibility that China will sign the final purchase contract because the Su-35 issue is first of all a political decision. A Russian source stressed: “All arms deals, especially major arms deals are political decisions.”

The Chinese military has already entered the era of attaching great importance to static and strategic air force. Due to causes of military technology, the Chinese air force needs a fourth-generation engine like the 117S. With it, the J-20 fighter jet under development will have supersonic cruise capability and be upgraded as a standard fifth-generation fighter.

Nor will there be great possibility in any change in the radar in the Su-35, i.e. the IRBIS-E radar, sold to China, but there may be adjustment in software for Chinese version of Su-35. There is the allegation that in order to reduce the price, China may choose a different radar.

However, according to Russian authoritative aviation experts, that does not make sense as the great increase in Su-35’s power output precisely aims at satisfying the needs of the IRBIS-E radar.

There seems to be a sign of renewed contact in the field of radar technological cooperation. The two sides are now discussing the possibility of joint development of passive phase array radar. That shows that China still has difficulties in developing that kind of radar.

If the Chinese air force has really obtained the Su-35, there will be a further all-round change in the air strategic situation in Asia-pacific region.

Source: huanqiu.com “Insider story of China’s purchase of Su-35 fighter, Radar and engine are the keys” (translated from Chinese by Chan Kai Yee)