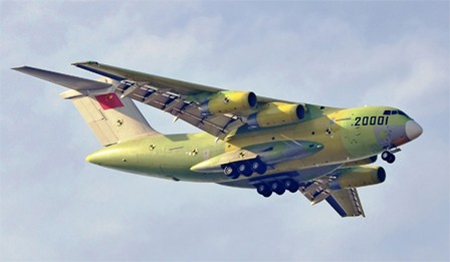 The Y-20 heavy lift aircraft will finally use the engines developed independently by China. Satisfactory progress has been made in developing them now!” said Chen Maozhang, China’s aviation engine expert and member of Chinese Academy of Engineering, with joy, confidence and pride.

According to military expert Wang Yanan’s comments, the Taihang engine can absolutely be regarded as a seed of China’s aircraft engine. Once it has burgeoned, there will be blossom of a thousand kinds of flowers.

It also promotes the realisation of the evolution from medium-thrust to large-thrust engines in China’s aircraft engine industry. When China has finished Taihang, other engines China needs in relevant areas will be developed on its basis. In this perspective, it is said that there will be thousands of beautiful flowers.

That is indeed the fact. Taihang is the power set for China’s military aircraft, but the seeds it has sown are expected to set roots and blossom in some spheres. With improvement, it can be used as the engine for major air and marine battle equipment.

Ship combustion turbines derived from the Taihang engine can be the power sets for large warships such as destroyers. Just as Zhang Enhe, chief designer of the Taihe engine, said: Taihe is the third generation of the power set for fighter aircraft successfully developed by China in pursuing independent development of aircraft engines.

It has ensured supply of engines, and sped up the great-leap-forward development of China’s aviation weapon equipment.

The Taihang engine has a thrust-weight ratio of 8, i.e. the thrust it generates is eight times its weight, which is advanced in the world. Though there is much room for improvement for Taihang compared with the thrust ratio of 10 of US F-119 engine, just as Chen Maozhang said, “The research and development of an engine is a process of incessant improvement. It takes over a decade, two decades or even a longer time from the finalisation of its design to its maturity. Taihang has been making steady progress.…

Chen Maozhang said, “China is making great efforts to catch up in developing both military and civil aircraft engines. The success with Taihang will certainly shorten the time to catch up. Like the Y-20 that will be equipped with homegrown engines, China’s large airliner C919 will also have Chinese power sets.”…

Chen said, “An aircraft engine is a very comprehensive and profound technology. We have an urgent need to intensify our study of fundamental issues in developing China’s aircraft engines in order to establish a sound foundation and keep on enhancing the ability of independent creation in the industry. We shall resolve not only the problems related the types of engines we need at present, but also the problem of sustained independent development of the entire engine industry.”

Meanwhile, America’s successful experience in the sphere of aircraft engines tells us the importance of integrating production, study, research and application and coordination in creation.

He said in the end, “We must pay great attention to the change in the mode of engine development, such as from that of paying attention to the development of a certain type, to that of attaching importance to the driving force of knowledge and technology while being urged by the demand.

It is precisely due to the hope to bring about such a change that in “2011 Plan” Beihang was told to have set up a “Coordinated Creation Centre for Advanced Aircraft Engines.”

Like Loading...
‹ Is the 1950 Korea mess relevant to the new Korean mess?
China’s internet bigwigs turn to politics ›