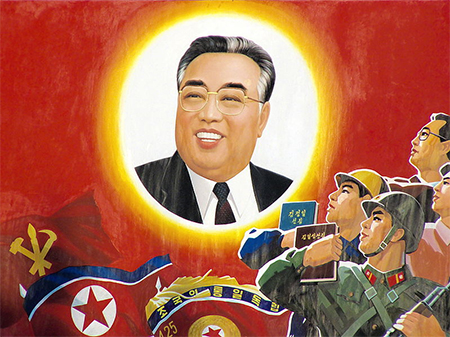 Some statues have been reported to have been destroyed by explosions or damaged with graffiti by North Korean activists.

Yeong Saeng (“eternal life”) monuments have been erected throughout the country, each dedicated to the departed “Eternal Leader”, at which citizens are expected to pay annual tribute on his official birthday or the commemoration of his death.

It is also traditional that North Korean newlyweds, immediately after their wedding, go to the nearest statue of Kim Il-sung to lay flowers at his feet.

Kim Il-sung’s image is prominent in places associated with public transportation, hanging at every North Korean train station and airport.

It is also placed prominently at the border crossings between China and North Korea. His portrait is featured on the front of all recent North Korean won banknotes. Thousands of gifts to Kim Il-sung from foreign leaders are housed in the International Friendship Exhibition.

According to R.J. Rummel, an analyst of political killings, Kim’s regime perpetrated over 1 million democidal killings through concentration camps, forced labour, and executions.

Here is an article in the U.K. Mirror about the gruesome life that a recent defector to South Korea had led in the North.

The sickening routine was heralded by the loud horns of North Korean Army trucks, followed by the hammering of fists and boots on nearby neighbours’ doors.

Pistol-wielding security thugs would line up villagers, insisting their children stood still and waited for the most obscene street show on Earth.

They would then watch in horror as a soldier dragged out a weeping suspect, who would then be shot in the back of the head at point-blank range.

Then it got worse.

It now seems that the regency for Kim Il-sung’s grandson, Kim Jong-un, may soon fire a missile in the general direction of Japan in celebration of his April 15th birth.

Although Secretary of State Kerry hopes to convince North Korea’s northern neighbor and general benefactor, China, to make North Korea stop, signals (assuming that they were intended as signals) have at best been mixed. According to this article,

Secretary of State John Kerry and China’s top diplomat agreed Saturday that nuclear weapons must be removed from the Korean peninsula — amid North Korean’s heighten rhetoric about missile testing and its nuclear programs.

Whose nuclear weapons? Beyond that, the immediate threat comes from North Korea’s apparent plan to launch a missile toward Japan. It had generally been thought that when President Xi Jinping said, “No one should be allowed to throw a region and even the whole world into chaos for selfish gains,” he was speaking of North Korea.  Also,

“We hear a growing tone of frustration … in official statements from the Chinese,” an administration official said. “China is increasingly concerned about the downstream effects of North Korea’s reckless pursuit of a nuclear missile capability and complications for China’s foreign strategic environment.”

However, it now seems that China may be taking sides with North Korea.

Foreign Ministry spokesman Hong Lei refused to confirm that Xi had North Korea in mind when he uttered those words.

And the following day, People’s Daily, the Communist Party’s flagship publication, issued a stinging commentary, leaving no doubt who Xi thought was the culprit.

“Some country has spent hundreds of billions of U.S. dollars creating a situation that cannot be resolved and has eventually withdrawn in a disorganised manner at the same time causing a financial crisis in its own country,” stated a commentary titled “Who Has the Intention to Create Chaos for the World for Selfish Gain?” “Look back on the world’s security situation to the beginning of the new century. There are many ‘hot spots’ and ‘chaotic spots.’  The first of them are Afghanistan and Iraq.”

The People’s Daily commentary not only clarifies Mr. Xi’s intent, it also puts the movement of Chinese forces on the border with North Korea in an ominous light. Since the middle of last month, the People’s Liberation Army has been mobilising troops, planes, and ships there.

The border forces once were — and may now still be — at the highest state of alert. There are also reports of Chinese live-fire drills in the area.

North Korea needs Chinese financial and other backing and China needs to preserve her own stability. Among other things, that means avoiding massive turmoil in North Korea with the resultant presence in China of great numbers of “undocumented immigrants” from North Korea.

Here is one analysis and, if the author is even far less than half right, it would be very bad. We (and South Korea) were ill prepared for, and did not do well in, the earlier Korean Conflict. We and they are better prepared now. So is North Korea, although we don’t know for sure just how well prepared it may be or the extent to which, if any, China may come to its assistance.

Here’s what Bill Whittle has to say. Please watch it, because his treatment of the subject is excellent:

What we are doing (and failing to do) might well produce a conflict similar to that referenced in the analysis linked immediately preceding it. Toss Iran, its allies and their coreligionists into the mixing bowl and what do you get? I don’t want to find out. We may.

An article at CNN International is titled North Korea Already Won. In a large sense, it has. As the author observes,

If the crisis ended right now — with every piece of military hardware back to where it stood a few months ago and everyone taking a vow of silence on the matter so that we get no more threats and no more demands — the confrontation would have already sent clear and damaging messages across the globe, encouraging tyrants and regimes seeking or considering the idea of developing nuclear weapons.

When you have a nuclear arsenal, countries that could topple your regime with a tiny fraction of their power suddenly become afraid of making you angry.

This is a pernicious reality with tragic and hazardous consequences.

Bill Whittle said much the same. The CNN article continues,

As the latest crisis unfolded and as North Korea threatened a “preemptive nuclear attack” on the United States, a “final destruction” of South Korea, and a “nuclear attack” on Tokyo, world powers held a new round of talks with the Iranian regime over its nuclear program. Coincidence or not, the talks with Iran produced nothing, not even the customary agreement to hold more talks.

Iran, one can only imagine, must be paying close attention to the dance macabre between Pyongyang and the rest of the world. North Korea, whose entire economy is worth about $40 billion — less than a small-sized American city and a tiny fraction of prosperous South Korea and its trillion-dollar economy — has ordered the whole world to attention.

I wrote about the Korea – Iran connection here a month ago and the situation has continued to worsen. The connection is frightening and has been mutually beneficial for both regimes. Iran recently fired three new missile types of a previously untested type. They seem to be short range, but suitable for use at least against Israel and other regional states less than friendly to Iran.

“A potential Israeli attack on Iranian territories to hit a blow at its scientific and nuclear facilities is sheer madness and its consequences are catastrophic and uncontrollable,” Fars quoted the envoy as saying.

“Iran will not sit silent under such an aggression. Such a move can trigger a series of violence which will possibly lead to the World War III,” Ahani reportedly said, citing IAEA Resolution 533, which prohibits “all armed attacks against nuclear installations devoted to peaceful purposes whether under construction or in operation.”

I agree with Mr. Whittle’s thesis that we are being, and have been, played for suckers. That will most likely continue. If it does, the security of both the United States and the world in general will pay a big price.

Like Loading...
‹ China has feudal answers for modern problems
Central authority fails to face up to surge in emigration ›