Home › Health & Environment › In China, the license plates can cost more than the car

In China, the license plates can cost more than the car 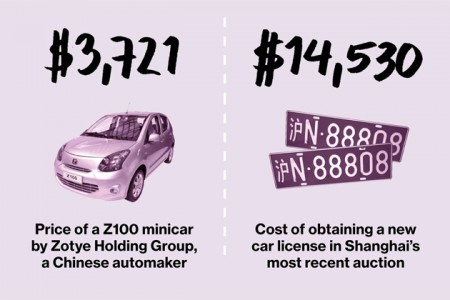 More than 9 out of 10 cars in the world’s most populous city are made by foreign companies, and it’s not just a reflection of mainlanders’ preference for Western design.

Some local automakers say the city’s license plate auctions are responsible for their weak sales.

Shanghai is one of four Chinese cities that limit car purchases by imposing quotas on registrations. The prices paid at Shanghai’s license auctions in recent months – 90,000 yuan ($14,530) – have exceeded the cost of many entry-level cars, the stronghold of Chinese brands such as Chery, Geely, and Great Wall.

While residents with modest incomes may be able to afford an inexpensive car, the registration cost is often beyond their reach. “Whenever there’s a restriction of new car purchases through the quota system, there is always a big impact on lower-price cars like the ones we make,” says Lawrence Ang, executive director of Geely Automobile Holdings, whose Panda minicar sells for 37,800 yuan.

After Beijing (pop. 21 million) introduced a license plate lottery in January 2011, the joint share of Chinese brands sold there plunged by more than half, to 9.7 percent for the year, according to researcher IHS Automotive. In Shanghai, which began auctioning license plates in 1994, domestic brands made up only 8.9 percent of cars sold in 2011 (the most recent data available), less than a third the level nationwide, IHS reports.

Shanghai officials have put in place a complicated – and expensive – process to buy the right to add a car to the often-gridlocked roads of this city of 23 million people. To register for the license auction, prospective car buyers must put down 2,000 yuan as good faith money. In exchange, they get a disk loaded with software they can use to bid online.

After a couple of rounds of offers, the government figures out the highest price it can charge to completely sell out the year’s new allotment of licenses. Lottery participants who had bid at least that much then get to pay for their plates.

Tianjin (pop. 13 million) may start them as early as May, China Youth Daily reported on April 11. “If the measures were followed by more Tier-2 and Tier-3 cities [China’s informal classification of medium-size metropolitan areas], the impact would be much bigger,” says Geely’s Ang.

“Local automakers have pretty much given up on markets like Beijing.”

China’s auto manufacturers face further trouble as cities tighten emission standards after toxic smog blanketed Beijing and Shanghai for much of the winter. Since Feb. 1, Beijing has used the same strict pollution regulations as the European Union on new cars, and Shanghai expects to impose them by November. The increased pollution scrutiny benefits European and American manufacturers because they have larger model lineups across which environmental compliance costs can be spread and because they already have developed models which meet the European rules.

With the combined blows of the pollution regulations and license plate quotas, some smaller domestic manufacturers have been forced to retreat from the biggest cities, according to Chi Yifeng, head of the Beijing Asian Games Village Automobile Exchange, a big dealer selling multiple car brands in the capital. “Local automakers have pretty much given up on markets like Beijing,” Chi says. “The plate lottery system is too big a test for them.”

Yet shifting their focus farther inland or to Western China won’t necessarily mean Chinese brands can escape their handicap in the biggest urban areas, says Cao He, an analyst with China Minzu Securities in Beijing. “Making their cars visible in cities like Beijing and Shanghai impresses future buyers like migrant workers when they consider buying cars back home,” Cao says. None of the top 10 car models sold in China last year were Chinese brands.

Chinese automakers have focused on cities such as Lanzhou in northwestern Gansu province and Chengdu in Sichuan. Domestic manufacturers can find plenty of growth in such cities, considered third-tier or lower despite populations ranging from 2 million to more than 10 million, says Wang Chuanfu, chairman of BYD, a Shenzhen-based automaker that counts Warren Buffett’s Berkshire Hathaway as an investor. “Tier-3 and Tier-4 markets are opportunities for local brands,” Wang says.

Source: Bloomberg – In China, the License Plates Can Cost More Than the Car

Like Loading...
‹ Did China steal Japan’s high-speed train?
Southeast Asia to reach out to China on sea disputes ›