A Chinese paramilitary policeman stands guard as a truck with a North Korea license plate drives on the Friendship Bridge over the Yalu River which connects North Korea’s Sinuiju to China’s Dandong, Liaoning province

China has stepped up checks on shipments to and from North Korea almost two months after agreeing to new U.N. sanctions that demand greater scrutiny of trade, but the flow of goods in and out of the reclusive state appears largely unaffected.

The sanctions were imposed after North Korea’s third nuclear test on February 12. China has said it wants the measures enforced, but few analysts believe Beijing will take steps that hurt North Korea as it is committed to a policy of engagement.

The sanctions, on top of those agreed after previous nuclear tests, target the North’s attempts to ship and receive cargo related to its banned nuclear and missile programs, aim to stop the flow of luxury goods to North Korea’s elite and tighten financial curbs, including the illicit transfer of bulk cash.

Reuters spoke to more than a dozen Chinese trading firms that do business with North Korea, mostly based in China’s border city of Dandong through which as much as 80 percent of the bilateral trade is conducted, and also in the port city of Dalian. The companies are involved in goods ranging from non-ferrous metals and car parts to clothing and food.

About half said they had noticed customs authorities taking a closer look at shipments since the sanctions were put in place, though others said trade with North Korea was generally always more tightly monitored than with other countries.

“Look at all the trucks out there and you tell me if trade has slowed,” said trader Liu Mingjin, pointing to a long line of Chinese and North Korean trucks queuing at Dandong’s run-down border post. “Customs may be taking a closer interest, but there’s no impact on trade whatsoever,” added Liu, who imports ginseng and exports pretty much anything North Korea wants, including building materials.

That suggests that while China is expressing its growing frustration with Pyongyang and its recent threats to wage war on Seoul and Washington, it still believes in its right to conduct normal trade with North Korea.

John Park, a North Korea expert at the Massachusetts Institute of Technology and the Harvard Kennedy School, said China was exploiting a loophole in sanctions that allow legitimate trade and aid. Under the measures, U.N. member states are not barred from economic development or humanitarian activities with North Korea. 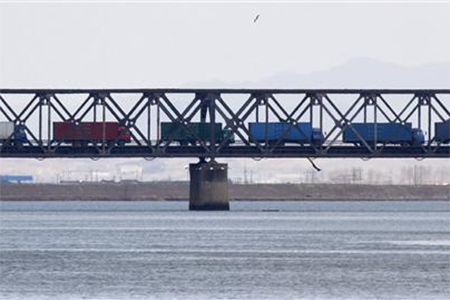 “Forget the debate about China implementing sanctions. In many cases Chinese authorities, (and) private Chinese firms classify what they are doing as economic development,” he said.

“Border trade (policy) is exactly the same as before – there’s no difference,” said Yin Tong, head of the municipal foreign trade and economic cooperation office. A second Dandong official, who spoke on condition of anonymity, agreed: “Trade between China and North Korea is coordinated at the state level: we don’t get to decide. And the situation hasn’t changed.”

China’s customs department referred questions about the sanctions to the Foreign Ministry, which has repeatedly said Beijing was committed to them. The ministry has refused to give details on what China is doing to enforce sanctions, but says China had the right to do legitimate trade with North Korea.

However, in a statement dated April 17, China’s Transport Ministry said it expected all government departments to fully follow the sanctions and ensure no transport of banned goods, including luxury cars, jewellery and anything related to nuclear weapons or guided missiles.

U.N. diplomats in New York said that up to now there was nothing to suggest China had taken steps to implement the sanctions aggressively. To be sure, they said all countries needed time and that it would take months to gauge U.N. member states’ commitment to the resolution.

One businessman who said Chinese inspections of goods shipped to North Korea had tightened also said the recent tensions were partly to blame. “The situation is tense, and we’re doing less trade. Cargo inspections seem to have tightened, too,” said the businessman, who asked to be identified by his family name Wang.

Another Dandong trader, Zeng Hongqun, said vehicle parts appeared to be being targeted for Chinese customs checks, though he was still able to export trucks in to the country. “Despite customs taking a closer look, we remain busy. North Korea is an old friend of China’s and we rely on them up here just as much as they rely on us,” he said, waiting at the customs post to send a new truck into North Korea.

Some traders in Dalian said customs officials were paying more attention, though this preceded the latest sanctions.

“Customs inspection on cargoes to North Korea has always been quite strict,” said Zhou Jin, manager of Dalian Hengan International Logistics Company, whose shipments can include valves, pumps, sewage treatment equipment and ball bearings. “But since the second half of last year, the customs started inspecting every single one of our containers to North Korea, and we’ve never seen this before.”

Still, the border around Dandong is relatively porous, which smugglers exploit, though mostly they say for non-sensitive goods such as rice and cigarettes. “I can go back and forward with no problems,” said one border resident, who asked not to be identified. “As long as you pay off the right officials in China and North Korea, they turn a blind eye.”

The success of the new sanctions depends to a large extent on China, U.N. diplomats have said. Beijing is the closest North Korea has to a diplomatic friend, and accounts for at least three-quarters of North Korea’s imports.

Bilateral trade dropped more than 7 percent to $1.3 billion in January-March, with China’s imports from North Korea rising 2.5 percent to $590 million but exports down 13.8 percent to $720 million – excluding fuel, food or other Chinese aid. Annual trade is worth some $6 billion, a fraction of China’s trade with South Korea which last year topped $230 billion.

China is the main way luxury goods get to North Korea. The March 7 resolution gave examples of some items North Korea could not import, from yachts and racing cars to luxury automobiles and several types of gems and jewellery.

KEEPING THE POWER ON

China also supplies virtually all of North Korea’s external energy needs – crude oil, diesel and jet fuel – much of it in the form of off-the-books aid.

Another trading source said coal imports from North Korea – typically entering China through Dandong’s Donggang Port after coming down the Yalu River or up the coast – were not affected.

Many Chinese companies are also involved in mining in North Korea. A source at Wanxiang Resources, which has a copper mine in Hyesan in North Korea’s Ryanggang province, said there had been no orders from China to withdraw their workers, although North Korean staff had been asked to attend more political activities, which was hurting production.

“If the political situation worsens, the Chinese workers can return very quickly since the mine is located 2-3 kms from the border,” the source said.

Choi Hyun-ju, a Dandong-based North Korean official whose job is to encourage investment in the North, said China had not had a change of heart about its companies investing in his country. “China’s government hasn’t been putting pressure on us,” he said. “The situation is tense at the moment, but it won’t always be this way. And the situation in North Korea is not as scary as has been reported.”

The most opaque area of China’s enforcement of sanctions will probably be related to illicit financial flows.

Chinese financial regulators had no comment in response to a report on South Korea’s Yonhap news agency last month saying Beijing had warned North Korean banks to stay within the remit of their permitted operations in China or risk penalties.

The bank most under the microscope is the Foreign Trade Bank, the North’s main foreign exchange bank. Washington announced sanctions on the bank last month, saying it helped fund Pyongyang’s nuclear program. It has urged other countries to do the same.

To be sure, there have been calls in China to punish North Korea by limiting or even removing trade and aid, led by influential tabloid the Global Times, published by the Communist Party’s official newspaper the People’s Daily.

Chinese have also taken to Sina Weibo, the country’s answer to Twitter, to denounce North Korea’s young leader Kim Jong-un for his warmongering, lampooning him as “Fatty Kim”.

But China will not cut North Korea off completely.

The country is a useful buffer from U.S. troops stationed in South Korea, and Japan. And if China turned the screws too much then North Korea could collapse – Beijing’s ultimate nightmare scenario. Not only would that release a flood of refugees into northeastern China, it would also raise the question of what would happen to North Korea’s nuclear material.

China has also been pushing ahead with three special economic zones with North Korea, hoping to tap low labor costs across the border and encourage Pyongyang to see the benefits of economic reform.

One of those is at Rason, 50 km (30 miles) across the North Korean border, opposite China’s Jilin province. A Jilin government official with knowledge of the zone’s development said the recent tensions had shaken the confidence of some Chinese companies which had wanted to invest there. However, local authorities were still pushing ahead, the official said by telephone from Changchun, capital of Jilin.

“Indeed some companies are starting to lose confidence, but from the government and the (Rason) management committee’s point of view, there is no change in policy,” he said.

“Senior leaders of the Jilin government have been trying to soothe the concerns of some of those enterprises.”