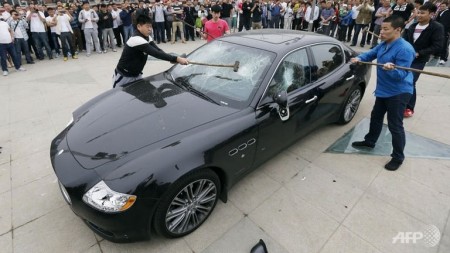 The car owner, identified as Wang, had the group attack the Maserati Quattroporte at the opening of an auto show in the eastern city of Qingdao in Shandong province, the Qingdao Morning Post said.

Video images showed the men going about their task with gusto, leaving the vehicle with a shattered windscreen and mirrors, the grille broken and dents to the bodywork. It was draped in a banner accusing the Italian manufacturer of poor decision-making.

Wang bought the luxury car in 2011 for 2.6 million yuan, the report said – around 100 times the average income of Chinese urban residents last year.

But problems first arose when he took it back to the dealer for an unspecified repair, with staff charging him for new spare parts despite using used ones, the paper quoted Wang as saying. It later failed to fix a problem with a door and scratched the vehicle, he added.

“I hope foreign luxury car producers acknowledge clearly that Chinese consumers are entitled to get the service that is commensurate with the brand,” Wang said.

Maserati’s China representative said the company and its dealer in Qingdao had responded to the customer’s complaint and it regretted his decision.

“We deeply regret that the customer decided to stop bilateral talks in such a sudden way,” it said in a statement read to AFP by an employee.

Qingdao’s authorised Maserati dealer said on China’s Twitter-like Sina Weibo: “We deeply regret that before the two sides could reach a result via negotiation, the vehicle owner… smashed the world-famous car in public… to cause a sensation.”

During the dispute “thugs” had disrupted its daily operations and intimidated staff and visitors, it added.

Chinese Internet users were divided over the incident, with some expressing scepticism about the car owner’s motives.

“Is it to defend his rights or just for show? I think it is more of a show – why do you smash your super car if you just want to seek justice for the change of a 2,400-yuan part?” said one posting.

China is the world’s largest auto market after overtaking the US in 2009. It is also a key market for luxury brands, with the growing ranks of mega-rich splashing out on fancy cars to show off their wealth.

But buyers enraged by bad service have carried out similar actions before.

In 2011 a business person also in Qingdao reportedly destroyed a three million yuan Lamborghini after failing to get problems with the engine and other car parts repaired properly.