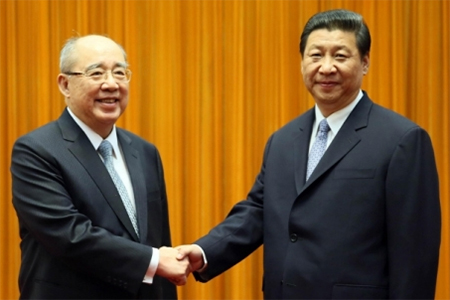 Joseph Wu Jau-shieh, executive director of the DPP’s Policy Research Committee, said on Wednesday his party would propose a resolution rejecting draft legislation that would enable the mainland’s semi-official Association for Relations Across the Taiwan Straits (Arats) to open a branch office in Taiwan. Arats’ counterpart in Taipei, the Straits Exchange Foundation (SEF), also wants to open a mainland office.

The island’s ruling Kuomintang said yesterday – after a summit between President Xi Jinping, in the capacity of Communist Party chief, and KMT honorary chairman Wu Poh-hsiung – that it would negotiate with opposition parties to remove the political barriers to establishing reciprocal offices.

“It is just like when we promoted the Economic Co-operation Framework Agreement [ECFA]. We faced many difficulties in Taiwan, and the opposition parties boycotted it in a high-profile manner. But in the end we overcame the difficulties and signed the agreement, “the Kuomintang’s statement said. The EFCA was signed in 2010.

But Joseph Wu was quoted by the pro-independence Liberal Times yesterday as saying: “The DPP is worried about … whether the [Arats] branch in Taipei would play the same role as the central government’s liaison office in Hong Kong, which would mean that Taiwan recognises that it is part of [the People’s Republic of] China.”

He was also quoted as saying that Ma’s political stance on cross-strait affairs – that of “one Republic of China, two areas” – did not reflect the status quo in Taiwan, and that it would bring “permanent harm” to the island’s future development in the international community. “For [Taiwan’s] political positioning, the DPP believes that there is no grey area, because there’s no way to accept the Hong Kong model,” he said.

On Wednesday, Taiwan’s Mainland Affairs Council reiterated that the island’s relationship with the mainland was based on the Constitution of the Republic of China, not on Beijing’s “one-China principle“. It also stressed that, under the constitution, mainland China is part of the ROC, and both Beijing and Taipei “do not recognise each other’s sovereignty but do not deny each other’s jurisdiction”.

Pro-DPP commentator Wang Hsing-ching, who writes under the name Nanfang Shuo, said that interpretation was “out of date” and unconvincing. Wang also claimed that “Ma’s so-called Beijing-friendly cross-strait policies benefit only some financial cliques and big families.”

At that time the DPP denied the existence of “consensus of 1992” reached by representatives of both sides in 1992: “Both sides of the Taiwan Strait agree that there is only one China. However, the two sides of the Strait have different opinions as to the meaning of ‘one China’.”

At that time, for the pro-independence DPP, the consensus is unacceptable. It wants one China and one Taiwan.

Since the KMT came into power in 2008, it has made great efforts for closer economic relations across the Taiwan Strait. It concluded the Economic Co-operation Framework Agreement with the mainland and has thus made Taiwan increasingly dependent on the mainland.

As a result, quite a few DPP members have changed their minds and support the one-China idea now. In October, 2012, DPP heavyweight Frank Hsieh who represents quite a large number of DPP members, made an ice-breaking visit to the PRC and put forth his constitutional consensus to replace the “consensus of 1992” and accept the one-China idea. His trick is that the constitutions on both sides of the strait provide that there is only one China. That is in fact a one-China consensus.

Now, the two sides are making great efforts to set up reciprocal representative offices across the strait. For Taiwan, its office on the mainland may function like a consulate to provide indispensable services for Taiwanese people. However, as point out in my post “China and Taiwan Cross-strait Representative Offices: One Offensive, the other Defensive” on May 7, 2013, the mainland office in Taiwan will certainly launch peaceful offensives in Taiwan for unification of Taiwan with the mainland. That will be a war without gunpowder for unification much better than military attack.

Can Taiwan resist the offensives?