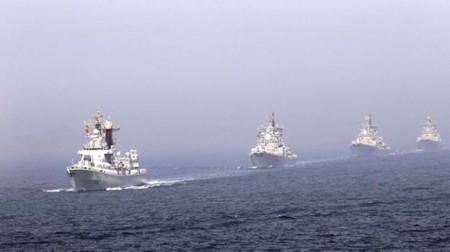 China and Russia made headlines this past weekend when they participated in the rather blandly titled Joint Sea 2013.

Despite the name, Joint Sea was China’s  largest ever joint naval exercise, and one of the more noteworthy bits of naval activity in the past several years.

Eighteen surface ships, one submarine, three airplanes, five ship-launched helicopters and two commando units took part in the exercise, participating in a variety of activities including antisubmarine warfare, close manoeuvring, and the simulated takeover of an enemy ship.

Chinese and Russian officials alike were quick to note that Joint Sea wasn’t directed at any third-party, something that might sound insincere but that actually reflects the reality that Chinese and Russian interests in the Pacific are very different.

Very different interests in the Pacific

While China’s growing naval power is an obvious fact, and while many of its neighbours are understandably worried about the growing sophistication of the People’s Liberation Army Navy (PLAN), it would be a serious mistake to look at Joint Sea 2013 and conclude that China and Russia are forming some sort of enduring naval alliance.

Some of the more excitable national-security hawks in Washington will undoubtedly look at the activity as evidence that China and Russia are now operating as one, and will demand that the U.S. Navy respond accordingly by building more ships, spending more money, and making a conscious effort to increase its visibility in the region.

However, Joint Sea, like much of the China-Russia relationship, is a transactional deal in which China and Russia had very different goals. Moscow and Beijing have no illusions that their relations are based on friendship, values, or enduring interests; there merely are certain times and places where, for very different reasons, it makes sense for them to cooperate.

So why hold Joint Sea 2013? What did the two countries get out of it?

Well, China got a chance to practice and hone the logistical and command-and-control skills necessary for large-scale naval deployments and perhaps learn a few lessons from their more experienced Russian comrades. Despite its impressive growth in recent years, the PLAN still doesn’t have much experience operating outside of its own territorial waters. In order to be a credible blue-water navy it needs to substantially improve its capacity to conduct long-distance operations.

Russia, meanwhile, got the chance to remind the West that it has powerful friends of its own and that any efforts to marginalise or isolate it are bound to fail. After all, if Russia enjoys productive ties with the world’s fastest growing economy and most populous nation, it is unlikely to be crippled by EU regulations or rulings from the European Court of Human Rights.

However, while Russia would like to remind everyone of its growing ties with China, it’s worth remembering that for all of Moscow’s attempts to re-orient itself toward Asia the vast bulk of the country’s population, wealth, industry – and especially, naval infrastructure – remains in Europe. Russia’s Pacific fleet represents roughly 25 percent of the nation’s overall naval forces, and both the Northern and Baltic fleets tend to receive better and newer equipment.

More important, the most competent and competitive parts of Russia’s shipbuilding industry are thousands of miles away from Vladivostok – in places such as Petersburg, Baltiisk, Severodvinsk, and Tartarstan. Russia has achieved substantial success in building naval warships for export, and in ramping up construction of its own submarines and surface combatants, but the plants building those ships, quite simply, are not located in the Pacific.

Russia’s ability project naval force in the Pacific, never strong to begin with, is limited and is unlikely to grow much in coming years because of severe and unchangeable geographical constraints.

Unlike Russia, which must divide its naval forces between the Baltic, the Black Sea, the Caspian, the north, and the Pacific, China can focus all its attention on a single body of water. And, also unlike Russia, China’s shipbuilding industry and naval infrastructure is highly concentrated. The fact is that China is a much more consequential actor in the Pacific, while Russia can only ever play a minor, supporting role.

Moreover, despite all of the loud protestations of Chinese-Russian friendship, Russia has no interest whatsoever in supporting China in its increasingly acrimonious dispute with Japan over the Senkaku/Diaoyu islands in the East China Sea. Russo-Japanese relations have actually improved markedly over the past several years, largely driven by the recognition that the countries each have something to offer the other: Russia has vast reserves of natural gas (particularly important now that Japan is moving away from nuclear power) while Japan has unmatched expertise in high-tech manufacturing and industrial production.

Russia and Japan aren’t likely to become friends, but when it comes to the disputes in the East China Sea, Russia will do what it does best: diplomatically stall and plead for “both sides” to resolve things peacefully.

China’s naval cooperation with Russia is a sideshow

The Chinese-Russian naval exercises, then, are a very impressive spectacle that, upon further inspection, has exceedingly weak foundations. Outside of a general unease with American power, Russia and China have few shared interests in the Pacific; Moscow closely cooperates with Vietnam and India, which are not exactly on the best of terms with Beijing. But even if the Russians and Chinese had a common vision for the Pacific, for basic geographic and demographic reasons they are ill suited for an alliance.

The Asian part of Russia is, quite simply, too distant, too thinly populated, and too underdeveloped to serve as an effective base of power projection. That could conceivably change decades down the line, but at the moment Russia has little interest in acting as an Asian power and even less ability to do so. China’s naval power is a legitimate concern, but its cooperation with Russia is a sideshow.