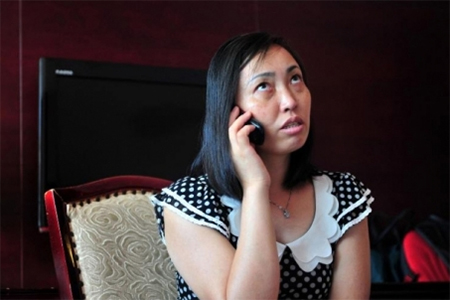 CCTV reporter Ji Chenghai reported on Monday: “With respect to the case of Tang Hui v. Hunan Yongzhou Committee of Re-education Through Labour for administrative compensation, at 9:15 am, Hunan Higher People’s Court gave its verdict of final instance.

“Tang Hui has won the case. The Committee has been ordered to pay Tang 1,941 yuan ($317) as compensation for infringement on personal freedom and 1,000 yuan ($163) for soothing of mental injury. The court did not support Tang Hui’s demand for a written apology.”

SCMP gives a summary of her case in its report Police chief apologises to Tang Hui, mother of rape and kidnap victim, “In 2006 Tang’s daughter, who was 11 at the time, was kidnapped, raped and forced into prostitution, prompting Tang to seek justice for the abductors and the police whom she says protected them.

“She took dramatic steps including kneeling for hours outside the Hunan high court and travelling to Beijing to file petitions with higher authorities, an age-old practice in China that irritates local-level officials.

“Seven men were finally convicted in June last year, with two condemned to death, four given life sentences and one jailed for 15 years.”

Note: Because of police protection, it took 6 years for the criminals to be finally punished, but the police who protected them have not been punished. Therefore, SCMP says:

“But Tang continued to agitate for the policemen to face trial. Two months later she received her labour sentence after being accused of ‘seriously disturbing social order and exerting a negative impact on society’.

“The re-education through labour system gives police the right to hand out sentences of up to four years without a judicial trial.”

It “sparked widespread public outrage in August last year, prompting her release just a week later and unleashing criticism of the system.”

Early this year, Tang sued the committee that decided the labour camp sentence seeking apology and compensation of 1,463.85 yuan ($240) for the time she served, but lost. She later filed an appeal.

“It was heard on July 2 at the Hunan provincial high court in central China, ending without a decision after nearly four hours.”

“More than 200 people, including 50 journalists, attended the session, the court said in a series of Weibo posts accompanied by photos in and around the courtroom.”

Many people and media are all participating in the fight.

Knowing vested interest’s strong opposition to democracy, he did not talk about democratic supervision but two weeks after he came to power, he took sudden actions to close all black jails, release all the petitioners imprisoned there and told local officials to pay attention to people’s complaints and resolve their problems.

The battle for democratic supervision has thus really begun. However, do not think that Xi’s words may bring about 180 degree changes overnight. How do local complaint bureaus implement Xi’s instruction?

There is the following example:

At the complaint that policemen beat up citizens, an official of Suzhou complaint bureau defended the police, saying, “If the police don’t beat people, what’s the point of keeping them? The police are the government’s violence machine” (see my post Chinese official says police job to beat people).

Officials shield officials! What is the use to lodge complaints at local complaint bureaus?

In spite of Xi’s instruction that complaints should be resolved at local levels, people swarm to Beijing again, as it seems that only the central bureau under Xi’s leadership wants to listen to citizens’ complaints.

As the well-known Chinese saying goes, “Where there is a policy form above, there is a way to counter it below.”

Xi Jinping has closed the black jails local governments set up in Beijing, but local corrupt officials can set up such jails elsewhere and send thugs to intercept petitioners on the ways leading to the complaint bureau in Beijing.

In the report, a worried petitioner said: “By giving information like our names and addresses in the system (internet complaint system), it’s just much easier for the government to track us in the future.”

However, the fight for democracy is not Xi Jinping’s fight alone. It must be the fight participated by all those who want China to be a better country. Only with popular participation can Xi win.

Tang Hui’s victory in her appeal proves people’s and media’s power when they have participated. I believe the central authority has also played its role in bringing about such a victory.