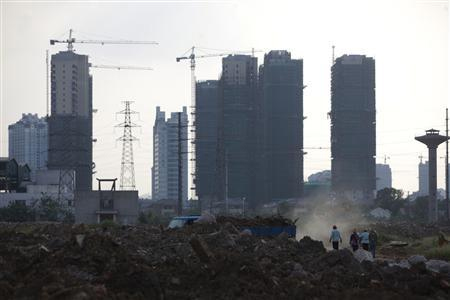 Workers walk at a demolished quarter at an abandoned steel plant in Wuxi, Jiangsu province

The nightmare scenario for China’s leaders as they try to wean the country off a diet of easy credit and breakneck expansion is a local government buckling under the weight of its own debt. Few provinces fit that bill quite like Jiangsu, home to China’s most indebted local government.

Hefty borrowings through banks, investment trusts and the bond market by Jiangsu’s provincial, city and county governments have saddled the province north of Shanghai with debt far higher than its peers, public records show.

Many of the province’s mainstay industries, including shipbuilding and the manufacturer of solar panels, are drowning in overcapacity. Profits are dwindling, and the government’s tax growth is braking hard.

That leaves Jiangsu vulnerable as President Xi Jinping and Premier Li Keqiang slow the country’s giant economy to push through reforms aimed at reducing its reliance on the massive investment that made the country the factory to the world in favor of more services- and consumption-led growth.

As part of that, Beijing has ordered a clamp down on provincial government borrowing and land sales, the mainstay income for many local administrations. But equally, Beijing expects local governments to absorb much of the cost of downsizing many industries, leaving provinces like Jiangsu caught between a rock and a hard place.

Standard Chartered, Fitch and Credit Suisse have estimated local government debt in China at the equivalent of anywhere between 15 percent and 36 percent of the country’s output, or as much as $3 trillion based on World Bank GDP figures for 2012.

“This has historic precedents in Brazil where in the three crises of 1989, 1993 and 1999, the root cause was the state government’s excess debt,” he said.

Little public information is available on the total debt of Chinese local governments. Indeed, earlier this month China’s Vice Finance Minister Zhu Guangyao said Beijing did not know the precise level of their debts either.

But from what ratings agencies and think-tanks can piece together, Jiangsu may be the standout debt risk among China’s 31 provinces.

Looking at bank loan books, they can see that China’s eastern provinces including Jiangsu have the highest concentration of government debt. Jiangsu then looms large because of its reliance on costlier and alternative forms of financing, which they said suggested that cheaper bank loans and land sales are not giving the authorities the funding they need.

The risk that Jiangsu might pose to the Chinese economy in a crisis is clear. On its own, the province would be a top 20 global economy with GDP greater than G20 member Turkey. Its 79 million population tops that of most European countries.

Provincial government officials declined to comment for this story.

Some major employers in the province have been pushed to the brink, and – at a time of mounting fiscal pressure on the local government – are seeking bailouts from heavily indebted authorities in order to survive.

Earlier this month, China’s biggest private shipbuilder, China Rongsheng Heavy Industries Group, called on the local government for financial help as it teetered on the financial brink. Media reports said it had laid off 8,000 workers.

Wuxi Suntech, an arm of China’s biggest solar panel maker, earlier this year filed for bankruptcy protection. Sources have said it also hopes for financial assistance from the government of Wuxi, a major Chinese city in the province.

In other signs of stress, Chinese national media have reported that some struggling localities are forcing employees to raise funds for them, setting individual targets as high as 600,000 yuan ($97,800). Unless targets are met, employees are not allowed to work, leading many to turn to relatives and friends for cash.

The government of Binhu district in Wuxi tried to dock civil servants’ wages as it was running out of cash, residents said. The plan was quickly retracted.

Borrowing and selling land to property developers are the only major ways that local governments can raise funds. While charged with developing their local economies, three quarters of the tax revenue they raise goes straight to Beijing.

Residents in Huazhuang Street, a village in Wuxi city area, say the local government did not have enough money to pay them for the houses they demolished to clear land for developers.

“My father had 600 square meters of property but lost 170 square meters,” said Jia Yanfang. “The government told him he has too many houses and refused to pay him.”

As Beijing has clamped down on bank credit for local governments, Jiangsu’s fund raising using alternative financing, or shadow banking, has soared.

Governments in the province accounted for 30 percent of all investment trusts sold in China in 2012, Shenzhen-based data provider Use-Trust said.

Wuxi alone raised 9.2 billion yuan this way, offering investors in its trusts returns of close to 10 percent, well above bank borrowing rates of around 6 percent. The funds were partly used to pay for the demolition of villages to make way for property developments and to build industrial parks.

Perhaps not surprisingly, Jiangsu has accounted for the lion’s share of the rise in China’s bad debts. A central bank official was quoted in Chinese media last month saying Jiangsu made up 40 percent of the increase in the first five months of 2013.

“The market would welcome some controlled defaults to check the moral hazard but I am not sure if the Chinese government is ready to do that,” said Sean Keane, managing director of Triple T Consulting, which provides policy advice to central banks and regulators.

Jiangsu also appears to be anticipating more debt problems. It approved a plan in April to set up a bank for bad debt, the first such regional bank of its type in China.

By most standards, Jiangsu’s economy is growing strongly. But it is also slowing down quickly leaving many factory production lines idle.

Its GDP growth braked to about 10 percent last year from 15 percent five years earlier. The provincial government’s fiscal revenues rose almost 14 percent in 2012, but that was a sharp slowdown from more than 42 percent in 2007.

In the southern part of Wuxi, where several steel trading firms and warehouses are located, some workers say business has never been so slow.

“There are many companies with no cash,” said Eva Chen, who works at a distributor for one of China’s state steel makers. “If they have no cash, we don’t give them the goods. Our focus right now is to grab sales and grab cash.”