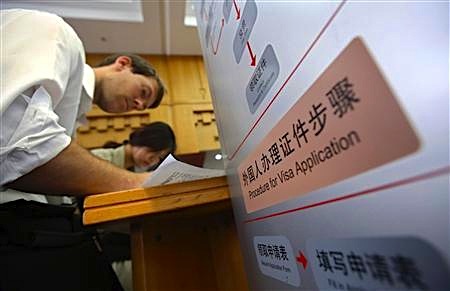 Foreign executives in China are upset at a new rule that allows authorities to hold passports for up to 15 working days when processing and renewing residency permits, saying it could disrupt essential business travel within China and abroad.

The changes are evidence to those who argue China is becoming a harder place to do business, especially following a wave of antitrust investigations that some executives contend have singled out foreign firms.

The increased processing time from five working days had prompted a “flood” of complaints from the expatriate community, said Gary Chodorow, a Beijing-based immigration lawyer at Hong Law Offices.

“What concerns companies is profits. When people are grounded they are not doing business. They are not making money,” he said.

The new rules took effect on July 1. Chinese officials have said they aim to deal with the rising flow of foreigners coming to China and to protect national security and social order.

The Ministry of Public Security handles residency applications, which are renewed annually.

Chodorow said the new rules could hamper travel for foreign executives who oversee offices throughout Asia, especially as cities such as Beijing and Shanghai have encouraged multinationals to establish Asia-Pacific headquarters there.

Foreigners are required to show passports when travelling by train or plane within China, and for registering at hotels.

Chodorow said he didn’t believe the government was using the policy to encourage the hiring of more Chinese executives at foreign firms or to make life difficult for multinationals.

“I think it is possible that the concerns of the business community were not anticipated,” he said.

In late August, Qu Yunhai, the deputy director for the Ministry of Public Security’s Bureau of Exit and Entry Administration, said 15 working days was the maximum authorities would hold passports.

He told a news conference individuals could ask for their passports for emergency travel, although it was unclear how that would work outside normal office hours.

Working in China Not Easy

Foreign executives already have to put up with a host of challenges working in China, from Beijing’s chronic pollution to strict internet censorship, although the country remains a draw because of its strong economy.

China does not appear to have consulted foreign firms or residents before issuing the new rule.

“The current issue with the 15-day wait is that it is too long. For many people living here that need to travel, it is too big of an impediment,” said Adam Dunnett, secretary general of the European Union Chamber of Commerce in China.

“There is always something that falls through the cracks or there isn’t an obvious solution for or that somebody didn’t think of. That’s the reason why consultation is helpful ahead of time.”

Despite the maximum period detailed in the regulation, the length of time authorities will hold passports may vary by city, adding to confusion.

A Ministry of Public Security official in Shanghai, China‘s commercial capital, said applicants would have to wait “about seven working days”.

Authorities in Beijing as well as the metropolis of Guangzhou in southern China said the 15-day policy was in effect.

“People grumble, but it’s just accepted as yet another hassle to doing business in China,” said one British executive in the financial services industry in Beijing, who declined to be identified because he was not authorised to speak to the media.

Like Loading...
‹ China races foreign rivals to mine seabed for valuable minerals
US investment in Australia helps both countries in China ›