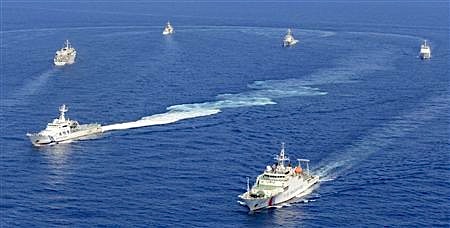 Vessels from the China Maritime Surveillance and the Japan Coast Guard are seen near disputed islands, called Senkaku in Japan and Diaoyu in China, in the East China Sea, in this photo taken by Kyodo September 10, 2013.   Credit: Reuters/Kyodo

China said it would not tolerate provocation after Japan’s top government spokesman said on Tuesday Japan might station government workers on disputed islands in the East China Sea to defend its sovereignty.

Relations between the world’s second- and third-biggest economies have been strained over the uninhabited isles which Japan controls but both countries claim. The isles are known as the Senkaku in Japan and the Diaoyu in China.

A year ago on Wednesday, the Japanese government bought three of the isles from a private owner, inflaming anger in China where there were big anti-Japan protests over the purchase.

Aircraft and ships from the two countries have played cat-and-mouse in the vicinity of the islands ever since, raising fears of conflict, perhaps sparked by an accident.

Japan’s Chief Cabinet Secretary Yoshihide Suga, speaking on the eve of the anniversary, said it was “extremely regrettable” that Chinese government ships had repeatedly entered what he described as Japan’s territorial waters.

The government was making “resolute but calm responses to defend our territory, territorial waters and airspace decisively”, he said, adding: “Our country will never make a concession on the matter of sovereignty.”

Asked if Japan might station government workers on the islands, Suga said: “That is one option”.

“The Chinese government has an unshakeable resolve and determination to protect the country’s territorial sovereignty and will not tolerate any provocative acts of escalation over China’s sovereignty,” he told a daily news briefing.

“If the Japanese side recklessly makes provocative moves it will have to accept the consequences.”

Relations between the neighbours have been soured for years by what Beijing says has been Tokyo’s refusal to properly atone for wartime atrocities committed by Japanese soldiers in China between 1931 and 1945.

In the latest incident off the islands, eight Chinese patrol ships entered what Japan considers its territorial waters near them on Tuesday, Japan’s coastguard said. The ships later left.

Hong said it was a normal, routine mission.

Japanese Vice Foreign Minister Akitaka Saiki summoned China’s ambassador in Tokyo and lodged a protest against the presence of the ships, a ministry official said.

On Monday, Japan scrambled fighter jets when it spotted what appeared to be an unmanned drone aircraft flying towards Japan over the East China Sea.

It was not clear what country the unidentified aircraft belonged to but Japan’s Foreign Ministry had made an inquiry about it with the Chinese side, Suga said.

Japanese Defence Minister Itsunori Onodera said on Monday that Japan would be on guard for the first anniversary of Japan’s purchase of the islands.

“September 11 was the day when the flare-up of tension between Japan and China was triggered. I think a firm posture is being called for,” Onodera said.

China’s official Xinhua news agency said it was up to Japan to take steps to improve relations.

“China will never give way to a bullying Japan as it did more than 80 years ago,” it said in an English-language commentary, referring to Japan’s invasion of China in the 1930s.

Like Loading...
‹ US investment in Australia helps both countries in China
China: Guangzhou to empty labour camps ›