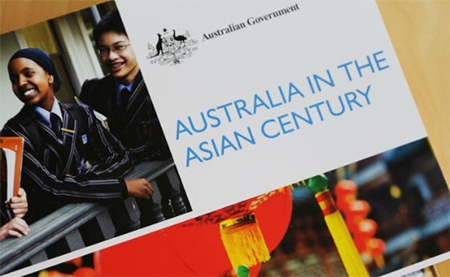 The centrepiece of the Gillard government’s foreign affairs strategy – the Australia in the Asian Century white paper – has been largely jettisoned by the Abbott government.

Craig Emerson, who as a senior Labor minister was responsible for the white paper’s implementation, said yesterday that he was surprised and disappointed the document and all its accompanying material had been taken from its website and sent to archives.

“Of course it’s the prerogative of any democratically elected government to apply its own policies towards Asia and not to be bound by those of a previous government,” Dr Emerson said. “But to take down the white paper and replace it with nothing sends a bad message to Asia.”

Foreign Minister Julie Bishop told The Australian the government viewed the white paper, released 12 months ago tomorrow, as a “useful reference” document and would use parts of it that fitted with Coalition policy.

“Elements consistent with the Coalition’s policy of economic diplomacy and deeper engagement in the region through soft power diplomacy – for example, the New Colombo Plan – will be considered on their merits,” Ms Bishop said. “The contribution by universities, business and the community is a valuable resource.”

Ms Bishop was critical of the white paper when it was released by Labor last year.

“It has failed to set out a strategic vision for the steps that we should take in this country in response to developments in the region,” she said at the time.

“Rather than address the critical issues, the white paper is a brazen attempt at self congratulation that tries to make the argument that to take advantage of Asia’s growth we merely have to adopt Labor’s current policy agenda.”

Ms Bishop said the white paper had no new funding and little detail of how its goals would be achieved. “The government has a track record of producing documents with grandiose launches, such as the 2009 defence white paper, and then failing to act on the report,” she said.

A government official said it was normal practice to take down a previous government’s material when administrations changed.

However, the defence white paper produced by Labor this year is still available on the Australian Defence Force website.

While the Asian Century white paper was largely the work of former treasury secretary Ken Henry, The Australian understands that up to 100 officials worked on it for a year. The paper set out 25 objectives for Australia to take advantage of economic growth in Asia, including more Asian language training in schools. No funding was ever tied to the recommendations of the white paper and it did not lead to any major changes in the Department of Foreign Affairs and Trade.

A note on the white paper website says the site was archived on September 20, a fortnight after the federal election that brought the Abbott government to power.

“Content from the former website is available on the National Library of Australia‘s Trove web archive,” it says. The original site contains a link to the material on the National Archives site.

Dr Emerson, who retired from politics at the election, said the new government was entitled to rewrite the white paper, replacing any policies it opposed with its own. “But surely it doesn’t oppose them all,” he said.

Like Loading...
‹ Chen’s confession: who to trust in China now?
China’s State Council think tank sets out roadmap for reform ›