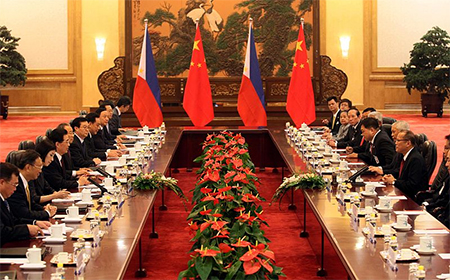 Summit between The Philippines and China

The “Kawayan politika” and “Balimbing diplomasya” approaches adopted by the late Philippine president Corazon Cojuangco Aquino (1933-2009) remarkably cultivated warm relationships between The Philippines and her neighbours in general and China in particular during her tenure (1986-92). These flexible diplomatic strategies were carried on by her successors, Ramos (1992-98), Estrada (1998-2001) and Arroyo (2001-10). The relation between China and The Philippines reached a peak during Arroyo’s time, not just due to rapid growth of international trade but also owing to the absence of conflict of fundamental interest.

If a multi-national commercial deal is to be hammered between the surrounding countries and China for exploiting the crude, gas and minerals under the South China Sea in the coming decades, it is absolutely a right gesture for Aquino to be firm and loud on the sovereignty issue or otherwise the Filipino’s share of the pie will be minimal. It is simply because, at the bargaining table, Aquino has little to offer for all the necessary financial funding, technical know-how, equipment and infrastructure such as port facilities. To strengthen his position, he changed the game and drew in the U.S. to back him up.  All his moves so far are tactically correct.

The only problem is that Aquino has overdone it, to the extent that some of the moves were too provocative.  The unnecessary stand-off between the Philippine marines and Chinese naval vessels in May 2013 was a typical example.

There are essentially only two options available to The Philippines. Option A is to strike a good multi-national deal to exploit the treasure under the sea. Option B is to do it unilaterally and the following question is that when the Chinese naval vessels come to block the construction of the offshore crude oil rigs, will the U.S. battleships show up? My answer is: NO. During the recent Syria crisis, the opinion poll on entry into war showed that ordinary Americans did not want to engage into a combat which was basically none of their business. If the abuse of chemical weapons and the humanity concern cannot get the Americans involved, there will be absolutely no justification for sending troops to die for the crude in dispute between two Asian countries.

There were neither historical nor ethnical problems between these two nations. The so-called tension can be scaled down and unknotted easily. With reference to Taiwan, the solution is: WAIT. Aquino’s personal style of high profile leadership will be ended by the completion of his tenure. Both ordinary Filipinos and the powerful oligarchic groups such as Cojuangco, Ayala and Roxas will sensibly choose the path to talk for preserving and fostering their vested interests rather than to fight. The future presidents of the Philippines are unlikely to be so hawkish.

In the coming decades, more deals will be achieved between China and South Asia, the Middle East and Africa, delivering tangible advantages to the peoples through peaceful co-operation on all fronts. The Chinese helmsman rulers who are trained to look very long term can afford to wait for the next generation of counterparty for real talk. Take a quick look at Taiwan: Beijing applied patience for eight years to see the end of Chen Shui-bian’s tenure (2000-08) and then provided numerous commercial benefits to the island when Ma Ying-jeou came to power. China will do almost the same to The Philippines.  What the real question the Filipinos should think is how big their warehouses are to fill the incoming advantages.

Trade data is from National Bureau of Statistics of China http://data.stats.gov.cn/workspace/index?m=hgnd
By Keith K C Hui

Like Loading...
‹ US defies China by flying over East China Sea without notification
Housing, spatial price differences, and inequality in China ›