Home › Media & Entertainment › With glut of lonely men, China has an approved outlet for unrequited lust

With glut of lonely men, China has an approved outlet for unrequited lust 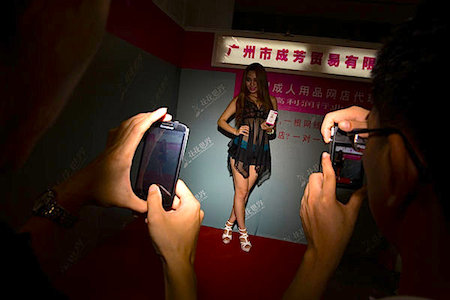 In Guangzhou, China, slack-jawed and perspiring, Chen Weizhou gazed at a pair of life-size female dolls clad, just barely, in lingerie and lace stockings. Above these silicone vixens, an instructional video graphically depicted just how realistic they felt once undressed.

A 46-year-old tour bus driver, Mr Chen had come earlier this month to the Guangzhou National Sex Culture Festival “for fun,” which was not how he described intimacy with his wife, who did not attend. “When you’re young sex is so mysterious, but once you’re married it gets really bland,” he said, barely taking his eyes off the screen.

With an official theme of “healthy sex, happy families,” the 11th annual exposition sought to remedy the plight of Chinese men like Mr Chen – and their wives, if they are married.

The overwhelming presence of men at the festival mirrored a demographic imbalance in China, where decades of the one-child rule and a cultural preference for sons combined with illegal sex-selective abortions have distorted the country’s gender ratio to 118 newborn boys for every 100 girls in 2012, rather than the normal 103 boys. In Guangdong Province, home to a migrant worker population of 30 million – China’s largest – the scarcity of women leaves bachelors with limited options.

Three decades after China began shedding its priggish Mao-era mores, sex is now a big business here. Across the country, pink-lit “hair salons” staffed by provocatively garbed women compete with massage parlors and late-night paid companions who slip their business cards under hotel room doors. Those looking to enhance their encounters can shop at countless “adult health product” stores and on the Internet.

Most of the inventory is made in China. According to state news media, more than 1,000 Chinese companies manufacture around 70 percent of the world’s sex toys, generating $2 billion a year as of 2010.

The bounty of carnal titillation must contend with the firm hand of the Communist Party, which bans pornography and punishes those guilty of “group licentiousness” in the name of protecting traditional Chinese values. But the party’s moral authority has frayed of late because of the publicized antics of its friskier members. In June, a government official was sentenced to 13 years in prison for corruption after a video surfaced showing him in bed with an 18-year-old woman. His fall came three months after photos depicting a coterie of six naked people, including a party official and his wife, exploded on the Internet.

In an attempt to give the sex festival a veneer of respectability, government-run medical organizations sponsored booths in a side room, which were, unsurprisingly, desolate. The main draw was lust.

Thousands of visitors, nearly all middle-aged men wielding cameras, poured through the aisles in search of any visible flesh. “Guys have been taking my picture all day,” said a bikini-clad model, Liang Lin, 23, who was hugging her bare midriff defensively as a throng of men jostled desperately to get a better shot.

Not far away, a male crowd waited for a diminutive Japanese pornography star named Rei Mizuna to appear. When she finally emerged from a dressing room to hand out racy autographed photos, her frenzied fans surged forward with such zeal they shattered a glass display case.

Those unrequited desires have helped spawn a booming domestic sex toy industry. “A stuffed man doesn’t know what it’s like to be hungry,” explained a salesman at one booth filled with inflatable dolls. Just then, an older gentleman approached and tried to bargain over an $8 figure with black tresses and a vacant stare.

Across the floor, the Chinese chain Buccone sold higher-end companionship. These $6,400 rubber dolls warm up “just like a real person,” said an employee, Nie Tai, 23, and could be customized. “Some men come with photos of their late wives.”

Huang Yulong, who works for a lingerie company called Toylace, was unfazed by the festival’s libidinous fervor. “Chinese men have a fetish for tearing off a woman’s clothes, so they’re not looking for romance,” said Ms Huang, standing beside a mannequin wearing a fishnet body stocking that seemed to have run out of thread around the inner thigh. At least, not with their spouses, she added. “Customers say they’re buying for their wives, but we know it’s for their mistresses.”

In a country where it is still taboo to discuss sex publicly, creative packaging hinted at a multitude of personal tastes and private anxieties. Among the condom brands were Freud, packed in pink boxes, and Tiger Teeth, which lay beside a colorful assortment of prophylactics wrapped to resemble lollipops.

Perhaps because the domestic sex toy industry started with a focus on exports, many items boasted of a foreign mystique, like the hand-held Great Rome 5 and King Kong.

English mistranslations were particularly problematic among male sexual enhancement products, many of which suggested unintended consequences, like Black Widow. One vendor failed to impress a potential customer when he vowed that the Casanova pills worked best. “The effects last a week,” he said.

To attract potential buyers, some companies got creative, hosting pole dancing shows and other activities. Li Jianglin, 42, a shoe factory manager, won a contest in which participants raced to inflate condoms, huffing and puffing until the first one popped. “Go, go, go!” screamed the female organizer.

Mr Li won a cash prize worth 16 cents, strawberry-flavored condoms and a pink, battery-operated device with “overwhelm by joy” emblazoned on the box. He eyed the contraption, turning it this way and that. “The condoms are useful, but I don’t know what this thing is,” he said. “Really.”

Not all visitors appeared to be so clueless. Ignoring the festival crowds, a 66-year-old retired real-estate consultant fondled an anatomically correct gadget, which her husband promptly purchased for $8. “When men get older, that part doesn’t function very well and I have needs,” said the woman, who would identify herself only as Ms Huang.

She marveled at how times had changed since they married in 1975. “Back then, under Mao, you couldn’t talk about sex,” she said. Asked how they learned, Ms Huang smiled knowingly. “Instinct,” she said.

Source: NYTimes.com – “With Glut of Lonely Men, China Has an Approved Outlet for Unrequited Lust”