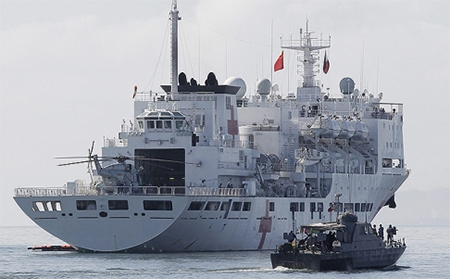 A prominent Chinese academic says Beijing could withdraw from the UN’s maritime treaty rather than submit to judgement on its disputed sovereignty claims in the South China Sea.

Regional security expert Professor Shen Dingli said the decision by the Philippines to refer its territorial disputes with China to UN arbitration demonstrated that it was “a mistake” for China to have joined the United Nations Convention on the Law of the Sea (Unclos) in the first place.

Shen, deputy dean of Fudan University‘s Institute of International Studies, was speaking on the sidelines of a forum last week in Manila, entitled “What is to be Done? Resolving Maritime Disputes in Southeast Asia”.

He said that “how to make China not quit the treaty is in [the Philippines’] interests”.

Giving what he said was a personal opinion, Shen said the Philippines had blundered by going to the UN International Tribunal on the Law of the Sea to seek judgement on the validity of China’s “nine-dash line“, through which it claims most of the South China Sea.

That claim is disputed by the Philippines, among other nations, and Manila filed the UN action in January.

“The more you sue China, the more China would [want to] quit the treaty. [In that event, China] would never abide by the treaty, and [the Philippines would] have no international base for China to observe any more,” Shen said.

He said there were four ways available to settle the dispute: war, the UN tribunal, bilateral negotiations, and mediation by a third country.

He said he advocated what he said was a win-win solution.

“[China could say to the Philippines] ‘I am willing to cut my sovereignty … your island is ours but we still want to fish [there] … You allow us to fish, we allow you to take what you have taken.”

Manila’s action before the UN tribunal was a hot topic at the conference hosted by the Angara Centre, a private think tank created by former Philippine senator Edgardo Angara.

Dr Ian Storey, a senior fellow at Singapore’s Institute for Southeast Asian Studies, said “China is furious” at Manila over the case.

He said China’s attitude to the situation was “how dare the Philippines have the temerity to take us to court without consulting us. How dare you. We will punish you for that.”

He said that China had tried to humiliate and isolate Philippine President Benigno Aquino by effectively withdrawing an invitation to a China-Asean trade fair in Nanning in September by saying “Oh, by the way you can only come if you withdraw your suit”.

Storey suggested that Asean and China should strike an “incidents at sea agreement” similar to that established between Russia, Japan, South Korea and Western countries in the 1980s.

He said Manila should be prepared for the possibility that the UN tribunal would decide not to issue a ruling because it might damage Unclos.

He said the tribunal was likely to have dealt with the suit by 2016, the year Aquino steps down.

Philippine Supreme Court Associate Justice Antonio Carpio, a guest at the forum, said it would be “horrible and a tectonic disaster” should a new president drop the case against China.

“That means … admitting that our position is weak,” said Carpio, who wrote the Supreme Court ruling that Philippine territorial claims in the South China Sea were constitutional.

Carpio, who was a presidential official when China seized Mischief Reef in the mid-1990s, rejected Beijing’s assertions that Manila had refused to negotiate.

“We have been trying to talk to them for the past 15 years. When they occupied Mischief Reef 15 years ago, we asked them ‘Let’s sit down and negotiate’. They said – ‘No, it’s ours’.”

A separate symposium by the Philippine Association for Chinese Studies was also held last week on the same topic.

Dr Wu Shicun, president of China’s National Institute for South China Sea Studies, suggested that Beijing and Manila could thaw relations by co-operating in “low-sensitivity fields” such as disaster relief.