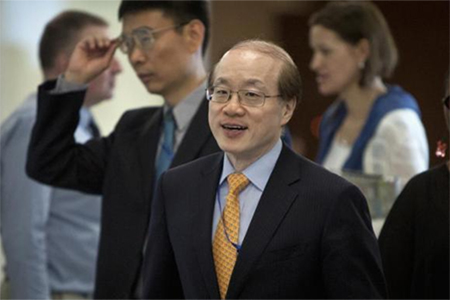 China’s Ambassador to the United Nations Liu Jieyi arrives for a meeting of the five permanent members of U.N. Security Council in New York

China took its propaganda war with Japan to the United Nations on Wednesday, questioning Japanese Prime Minister Shinzo Abe‘s motives for visiting a controversial war shrine and calling on him to correct his “erroneous outlook” on history.

Abe’s December 26 visit to Tokyo’s Yasukuni Shrine, where Japanese leaders convicted as war criminals are enshrined along with other war dead, infuriated China and South Korea and prompted concern from the United States, a key ally.

“It all boils down to whether the leader of a country should stand on the side of maintaining the principles and purposes of the charter of the United Nations or to side with war criminals,” China’s U.N. envoy Liu Jieyi told reporters.

Both China and Korea suffered under brutal Japanese rule, with parts of China occupied in the 1930s and Korea colonized from 1910 to 1945.

“The question inevitably arises as to what Abe is up to, where does he intend to take his country?” Liu said.

“The international community should remain vigilant and issue a warning … that Abe must correct his erroneous outlook of history, he must correct his mistakes and he must not slip further down the wrong path,” he said.

Ties between Japan and China were already strained due to a simmering row over ownership of a group of uninhabited islands in the East China Sea. China has said it is willing to talk to Japan about the issue but has accused Abe of not being serious about wanting to resolve the dispute.

In the spat over Abe’s shrine visit, the Chinese and Japanese envoys to London both wrote columns in Britain’s Daily Telegraph newspaper in the past week likening each other to Lord Voldemort, the villain in the Harry Potter stories.