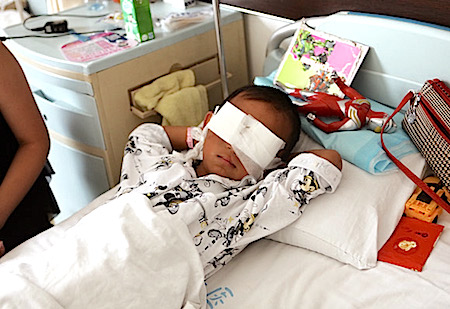 Guo Bin, a six-year-old boy from Shanxi province, in northern China, thought the sky had gone permanently dark when he woke up, one day this summer, bloody-faced and crying near his parents’ home. “We originally thought he had fallen down and smashed his face,” Guo’s father, a farmer, told a local television station. “We didn’t notice that his eyes were gone when we first discovered him.” But then he saw that there were only pits where his son’s eyeballs should have been. The boy told his mother that the last words spoken to him by the still-unidentified woman who kidnapped and drugged him were “Don’t cry, and I won’t gouge your eyes out.”

Immediately after news of the savage assault broke, an apprehensive public leapt to the conclusion that the perpetrators were driven by an obvious motive: they robbed a child of his sight to turn a quick profit in China’s thriving black market for organs. The story quickly became national news and sparked an uproar on Weibo, the Chinese version of Twitter, where, months later, citizens have not stopped clamoring for redress. Everywhere in the world, the number of patients in need of kidneys, hearts, livers, or corneas outstrips the number of donors, but in China the situation is particularly acute. Even though China performs more transplants annually than any country except the United States, less than one per cent of the population in need of life-saving transplants receives them (as compared to about twenty per cent in the United States). According to China’s Ministry of Health, some 1.5 million people continue to wait for transplants.

Traditional Chinese customs calling for bodies to be buried or cremated intact (so that a person may be reincarnated whole) discourage individuals from donating their organs. For the past three decades, the government has tried to make up the difference by harvesting organs from executed prisoners. Until 2007, nine-tenthsof the country’s organ supply came from its tens of thousands of death-row inmates, whose executions have sometimes been expedited for the purpose of harvesting organs. For many years, Chinese authorities refused to acknowledge this practice, though a 2006 investigation conducted by two Canadians—David Kilgour, a member of parliament, and David Matas, a human-rights lawyer—concluded that the selling of prisoners’ organs without their consent was a “billion-dollar business in China.” According to the report, vital organs were regularly harvested from executed prisoners and distributed by shadowy intermediaries.

The report, along with criticism from human-rights activists, foreign-transplant specialists, and Chinese doctors (one of whom testified before a U.S. Congressional committee that he had taken skin from a prisoner who was still alive), compromised the image that China likes to project of itself, as a superpower thoroughly in line with established global norms. Bowing to international pressure over the past five years, the Chinese have recently introduced measures to reduce the number of executions and to curb organ tourism, a practice that brings foreigners facing long waits for voluntary donations in their own countries to China, where they can pay to immediately obtain the needed organ. Although no official records are kept for such transactions, the tourists and donors have remarkably consistent profiles: the tourist, usually the citizen of a developed country, pays a substantial sum; the donor is a financially desperate Chinese citizen, or, in some cases, a permanently incarcerated one.

The existence of a flourishing underground organ trade in a country ruled by authoritarian decree rather than written law should not exactly come as a shock. Because the rules and decisions are made by the powerful and for the powerful, the average citizen has little incentive to respect the law. When it comes to health care, where the government has done little to provide a safety net for its citizens, they have all the more reason to take matters into their own hands.

In August, only a few days before Guo Bin’s eyes were stolen, the Chinese Ministry of Health announced plans to phase out the practice of harvesting of organs from executed prisoners and begin a country-wide program of voluntary donation. Huang Jiefu, an Australia-trained transplant surgeon who was then the deputy health minister, said, “I am confident that before long all accredited hospitals will forfeit the use of prisoner organs.” A hundred and sixty-five hospitals are set to implement voluntary organ systems in the coming months. (In November, Huang, who now heads the country’s organ-transplant office, vowed that all transplant hospitals would cease using prisoners’ organs by the middle of this year.) But the program was outlined only in the broadest of strokes, and the path to implementation is unclear. Evidently, a major impetus for Beijing’s decision was international pressure for transparency and greater respect for human rights. But it remains to be seen whether such a system has any chance of combatting the entrenched corruption in managing organ transplantation, or whether it could be regulated so as to prevent the proliferation of a black market.

Nicholas Bequelin, a senior researcher with Human Rights Watch in Hong Kong, told me that “the complete lack of transparency led to the emergence of a lucrative gray market, through which wealthy or politically connected individuals could source the organ needed for a transplant from scheduled executions.” According to Bequelin, the booming organ business has, in turn, led to a situation “in which unscrupulous criminals have started sourcing organs themselves, either by buying organs from sellers or even, in some cases, kidnapping and harvesting organs from their victims.”

In this light, the health ministry’s plan to shift from prisoners’ organs to voluntary donations may reflect a political aspiration rather than an achievable goal. “They say they hope to stop executing prisoners in two years, but that is just a hope,” said Arthur Caplan, a professor of bioethics at N.Y.U. who has closely followed the organ trade in China. “I worry that they are not seriously committed to instituting cadaver donation,” which would diminish the need to harvest organs from prisoners.

Caplan is hardly the only skeptic. Even though Huang has stipulated that doctors and hospitals caught using organs from outside the network of a hundred and sixty-five licensed hopitals will lose their certification, it’s unclear how these laws will be enforced or whether the agencies in charge have any incentive to do so. Moreover, unlike in the United States, where individuals can freely log onto a computerized national database to look for information regarding specific donations and transplants, China’s equivalent database is not open to the public, which is likely to arouse suspicion about the prospect of administrative tampering. Information about matching methodology, donors, and recipients is not disclosed, either. Earlier this week, China’s state-run media reported that the system still “falls short of expectations.”

“The Ministry of Health is not the most powerful actor in this system,” Bequelin said. Unlike many developed countries, the Chinese central government provides little funding to hospitals, which restricts its ability to censure them for misconduct. Like almost every other institution in China, the medical system is heavily dependent upon guanxi, or relationships based on backdoor politics and bribery. High-ranking officials are regularly given special treatment, while common people are often barred from better-equipped medical facilities. In recent years, those with guanxi and a need for organs have also been known to treat prisons like personal slaughterhouses, searching for inmates who match their blood and tissue type.

In 2011, when the liberal Chinese newspaper Southern Weekend featured the story of a twenty-five-year-old migrant worker who had been forced to sell his kidney at a registered hospital by staff members working with traffickers, the public was outraged, but not necessarily surprised. A year later, in August of 2012, four traffickers, an anesthesiologist, a surgeon, a medical assistant, and two nurses weretried for helping a seventeen-year-old in Hunan sell his kidney in order to purchase an iPad and an iPhone. The teen-ager, who continues to suffer from renal failure caused by the surgery, received thirty-five hundred dollars for his kidney; the intermediaries turned around and sold it for nearly six times that amount.

Locating both a buyer and a seller for an organ can be as simple as visiting a high-volume Chinese-language chatroom. In mid-August, around the same time the Ministry of Health made its announcement, a casual browser of Baidu Knows, the Chinese version of WikiAnswers, found the following exchange:

A: Kidney, where to sell one? Thank you.

B: What’s your asking price?

A: A hundred and fifty thousand yuan? Where should I go?

B: I’ll be taking a ten-thousand-dollar commission. If you can guarantee me a long-term supply, I may be able to lower my fee.

A: What’s a long-term supply?

B: Don’t you think we have some rules in this industry? If you are the police…

A: I don’t have any supply. I am selling my own kidney and am badly in need of cash. I am nineteen years old.

For ordinary citizens, these stories only reinforce the pervasive suspicion that China’s legal and medical systems are inherently prejudiced—and that the vast divide between the powerful and the weak cannot be bridged by the action of the government, that chronic bungler. According to Bequelin, when it comes to organ-donation preference, “it is quite inconceivable that Party and government members would not be favored over ordinary citizens, because that’s the reality of life in China. Why should I pledge to give my organs if it is to end up in the body of an corrupt official?”

More than five months after Guo Bin was attacked, the culprit has not been identified. Some have alleged that the crime was committed by his mentally unstable aunt, who mysteriously leapt to her death down a village well one day later. (Family members, however, insist that she was at work elsewhere when the attack took place.) Other reports have suggested a family dispute, which Guo’s father flatly denies. Oddly, the detail that has resonated most widely has no apparent connection to the facts of the case: the boy’s eyeballs were found nearby, their precious corneas still attached. The story’s ongoing prominence in the media is, in fact, a testimony to the widespread infamy of the trade and the concurrent fear of organ traffickers. Unfortunately, the Ministry of Health’s well-intentioned plans for a voluntary organ-donation system will, more likely than not, function much like the prosthetic eyes that a hospital in southern China has kindly donated to Guo Bin. Although they may move and look like normal eyes, they only satisfy appearances.

Like Loading...
‹ Chinese troops to seize Zhongye Island back from the Philippines in 2014
China and Philippines: The reasons why a battle for Zhongye (Pag-asa) Island seems unavoidable ›