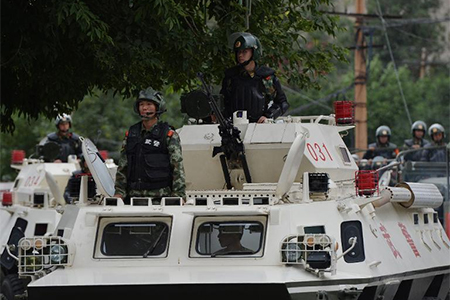 Triple explosions in China’s Xinjiang have killed three people and wounded two others, authorities said Friday, in what appears to be the latest incident of unrest in the largely Muslim region.

One person was killed after two blasts in a hairdressing salon and market, while two others died inside a car which “self exploded” when surrounded by police, said the Tianshan web portal, a local government-run mouthpiece.

The explosions happened at about 6:40 pm (1040 GMT) in Xinhe in Aksu prefecture, the report said, an area located at China’s extreme west on its border with Kyrgyzstan.

“Explosions occurred in a hairdressers and a market, which resulted in one dead and two injured,” it said.

“The police caught three suspects and when they tried to surround a suspect vehicle, it self exploded, resulting in two deaths in the vehicle.”

No further details were available.

In recent months it has seen more regular violent incidents, usually involving men armed with knives and explosives, according to official media.

However bomb blasts have been relatively rare.

Beijing attributes the unrest to religious extremists and separatism.

The most serious recent violent incident took place in the Turpan area of Xinjiang, leaving at least 35 people dead in June.

Last month, eight “attackers” armed with knives and explosives were killed during what officials said was a “terrorist attack” on a police station.

Earlier in December, 16 people, including two police officers, died in a clash near the Silk Road city of Kashgar. The authorities said “thugs” armed with explosive devices and knives attacked police as they attempted to detain them.

But the World Uyghur Congress, an exiled group that campaigns for Uighur rights, described that incident as a “massacre” of a family preparing for a wedding.

In late October, police said three Uighurs drove a vehicle into crowds of tourists opposite Beijing’s Tiananmen Square — the symbolic heart of the Chinese state — killing two people and injuring 40, before crashing outside the Forbidden City and setting their vehicle ablaze.

All three attackers, described as a man, his wife and his mother, died in the attack.

Xinjiang saw 190 “terrorist” incidents in 2012, according to the state-run magazine Outlook.

Information in the area is tightly controlled and difficult to independently verify.

In the worst outbreak of sectarian violence in recent years in China, around 200 people died and more than 1,600 were injured while hundreds were arrested in riots in the Xinjiang regional capital Urumqi in July 2009.