Home › Defence & Aerospace › Is this the end? China’s ‘Jade Rabbit’ rover hops to a halt

Is this the end? China’s ‘Jade Rabbit’ rover hops to a halt 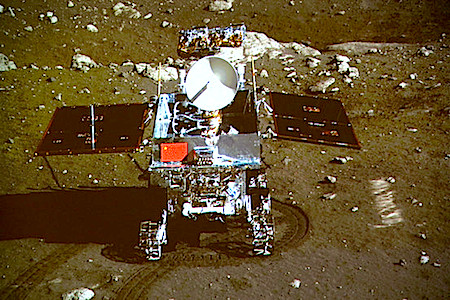 China’s lunar rover appears not to be as agile or as long-lived as its name implies.

The Jade Rabbit, named after a mythical lunar bunny who mixes elixirs of immortality, has experienced a mechanical abnormality resulting from the “complicated lunar surface environment,” the official Xinhua news agency reported over the weekend, citing China’s state space agency.

Deployed on Dec. 15 following the first soft landing of a Chinese spacecraft on a celestial body, the lunar rover was a key element in an ambitious program designed to help close the space gap with the U.S. and Russia. In fairness, it was never intended to last forever. In fact, it was only supposed to hop around the lunar surface for three months before slipping into an eternal slumber.

Nevertheless, the possibility that the Jade Rabbit’s mission may have come to an end more than a month early has left many in the country disappointed. Though the Xinhua report quoted Internet users expressing sympathy for the hobbled vehicle, the news agency added what could be interpreted as a subtle dig at China’s space agency by noting that the announcement of the Jade Rabbit’s difficulties came 10 years to the day after NASA’s Opportunity rover landed on Mars.

“Compared with Opportunity’s 10 years on Mars, Yutu’s one-month stay is not long,” the report said.

The mention of Opportunity, which is still rumbling around the Martian surface, got us wondering how the Jade Rabbit’s lifespan compares to other unmanned rovers. As the chart below shows, of the rovers that actually reached their destination, China’s rover doesn’t come out looking so good.

If China manages to resurrect the Rabbit, it will end up beating out the U.S.’s Sojourner rover, which spent two months and 20 days exploring the surface of Mars before NASA lost contact. But it will still fall far short of the former Soviet Union’s first lunar rover, the Lunokhod 1, which landed on Nov. 17, 1970, and lasted nine-and-a-half months.

On the other hand, China has a perfect 1-0 record in landing rovers, unlike the U.K., which lost the Beagle 2 Mars rover in 2003, and USSR, which lost or failed to launch five lunar and Mars rovers between 1969 and 1977.

It also enjoys the advantage of continuing to increase funding for its space program, unlike the U.S., which has kept NASA’s budget essentially flat for the past few years.

Whether that increased funding is money well spent, well, that’s another matter.

Source: ChinaRealtime – “Is This the End? China’s ‘Jade Rabbit’ Rover Hops to a Halt”

Like Loading...
‹ China and U.S. amazed that North Korea landed on the Sun
China leads mission to explore South China Sea for oil – 1800 kms from China ›