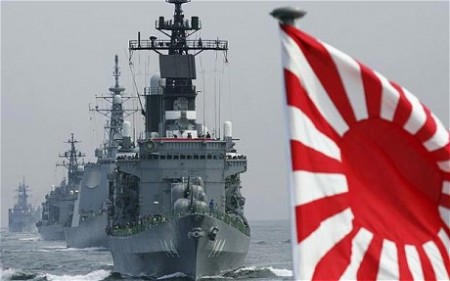 Asia Weekly, a Hong Kong-based news outlet (Chinese controlled), is reporting that Japan is secretly developing a nuclear weapons program in response to increasing hostilities with China over the East China Sea dispute.

According to the report, paraphrased by the Want China Times,

“With the capability to build at least 2,000 nuclear warheads, Japan has recently demanded the United States return 300 kilograms of plutonium. A Japanese military analyst told Yazhou Zhoukan that Washington has paid close attention to the potential development of nuclear weapons in Japan.”

Asia Weekly, known as Yazhou Zhoukan, is a popular Chinese-language platform with a 20 year publishing history.

The article notes that Mitsubishi, Hitachi and Toshiba all possess expertise in the area of nuclear energy and along with 200 other small companies could all be called upon to kick-start a nuclear weapons program. Japan already has over 40 tonnes of plutonium in its possession.

Influential voices like Major General Yoshiaki Yano of the Japan Ground Self-Defence Force are also calling on Tokyo to adjust its nuclear policy.

The story arrives hot on the heels of reports that China is extremely concerned about Japan’s initial resistance at hand back weapons-grade plutonium to the United States, which was bought back in the 1960′s for research purposes but has the potential to be turned into 50 nuclear bombs.

Earlier this year, Prime Minister Shinzo Abe announced that within the next six years Japan would revise its pacifist constitution, which limits its military activities to self-defence.

Tensions over China’s declaration of an air defence zone over the disputed Senkaku Islands have continued to simmer, with three Chinese ships sailing through the region on Monday in another show of aggression.

A deluge of aggressive rhetoric has emerged out of official Communist Party organs in recent months directed against the United States, including discussion about China’s ability to attack U.S. military bases in the Western Pacific, as well as a lengthy editorial which appeared in Chinese state media explaining how the Chinese military’s current reformation process was part of a move by President Xi Jinping to prepare the People’s Liberation Army for war.

Like Loading...
‹ China says 11 ‘terrorists’ killed in new Xinjiang unrest
China says it will win West over to its view on Tibet, Xinjiang ›