China’s support for Russia’s invasion of Ukraine is insincere 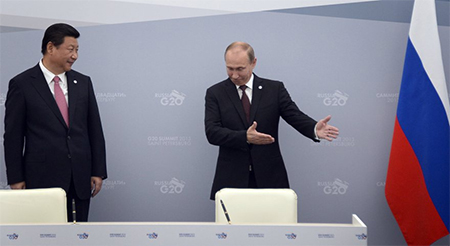 See, we just move the troops over here…

It was only a month ago that the close ties between Russia and China were on prominent display, with Chinese president Xi Jinping vowing that the two countries would “continue deepening our consultations and cooperation on major international issues and together maintain world and regional peace, security and stability.”

Only weeks later, following Russia’s invasion of the Crimean peninsula, that peace and cooperation is nowhere to be seen.

Russian foreign minster Sergei Lavrov claimed that Russia and China have “broadly coinciding points of view” about Russia sending troops to the Ukrainian province, a move that riled world markets and has been universally condemned by western nations. China, however, has been much more circumspect.

The Chinese foreign ministry said in a briefing on March 2 that China “respect[s] the independence, sovereignty and territorial integrity of Ukraine,” before adding it called on both parties to use “dialogue and negotiation based on respect for international law and norms governing international relations in order to uphold regional peace and stability.”

Q: The Russian Parliament approved the use of force against Ukraine. Does China offer diplomatic support to Russia? Does China recognise the new Ukrainian government?

A: On your first question, please refer to the remarks I made yesterday. With respect to the Ukrainian issue, we uphold China’s long-standing diplomatic principles and basic norms governing international relations, and also take into account the history and complexity of the issue. It is fair to say that our position, which is objective, fair, just and peaceful, follows both principles and facts.

On the second question, judgement needs to be made based on laws of Ukraine.

Asked later Monday whether he believes Russia violated international law, Qin said only, “I want to point out that we are aware of the historical facts and realistic complexity of the Ukrainian issue. There are reasons for why the situation in Ukraine is what it is today.”

There are reasons both practical and strategic for China to withhold support for Russia’s Ukrainian incursion. Beijing has developed close commercial and military ties to Kiev, buying grain and military supplies and also providing large loans to Ukraine. China may also be worried about the precedent of Russia justifying military action in order to ensure the safety of ethnic Russians—many of whom live on the Chinese side of the countries’ 4,195 kilometer-long (2,607 mile) shared border.

Parsing where China actually stands here is so difficult that some analysts, including Niu Jun, a professor of international affairs at Peking University, say Beijing is being obtuse on purpose. “They came out with a statement nobody can understand,” Niu told the AFP. “What this statement is really saying is, ‘what Russia did was not right and China does not want to support this military invasion.’”

Some western military analysts are concerned that China may use Russia’s action in Ukraine, whether it publicly supports it or not, as a template for expanding its own sphere of influence. In an unsigned op-ed, China’s state-run Global Times declared this week that the “evolution of the Ukrainian situation shows us clearly that in the international political arena, principles are decided by power,” before calling the US a “doormat” in the situation. “Military power is one of the most vital sources of strength for any country, though nations also need other powers,” the editorial concluded said. “What is happening between Moscow and Kiev repeats that lesson.”