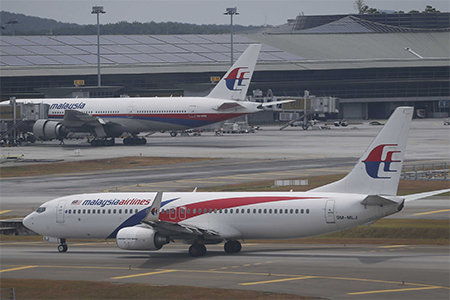 The following is speculation on the part of a Chinese netizen, and reflects the growing concern about this issue by Chinese Internet users. The post was made on March 15 2014. The opinions expressed do not reflect those of China Daily Mail.

I watched the live speech of the prime minister of Malaysia. The ambiguous attitude of the Malaysian government has provided me some inspiration of the actual process of this accident. It has occurred to me that the accident was not an accident but an event planned.

In the conference yesterday afternoon (Beijing Time), the Malaysian Prime Minister announced that MH370 went missing at around 8:00 am, rather than the previously quoted time, which was around 1:00 am. It means that Malaysian government was concealing the fact in the past week. Thus, two things tend to make me sceptical: The first is why the government chose today as the time to publish this fact, and what was going on during 1:00 am to 8:00 am? These two confusions are really important to find out the fact of the accident. To make them clear, I think some details of the entire process should be listed.

Before MH370 was reported missing, it had just flown above two points of contact in the Andaman Sea, western Indian Ocean. And these two points are on the path to the Middle East and Europe. However, the airline was planned to fly to Beijing, a city in the opposite direction.

Additionally, two passengers used passports stolen from others. As for the signal from the plane, it seems that only someone who was really professional in plane operations could turn the communicator off. What’s more, an Australian media company reported that the assistant pilot of MH370 had invited passengers into the cockpit and chatted with them while flying years ago. Above are all details known to the public.

Perhaps many facts have been hidden by the government. But based on the simple details published to us, some clues may be seen, whilst many details can also be suspected. And they are worthy to be employed to help us find what happened.

First, who could be professional about flying and was also eligible to enter the cockpit to turn off the communicator and radar? If (s)he was a hijacker, the ground mission controller would have heard a noise in the cockpit, and there would have been alarm from the plane. But it was not like that at all. Everything was smooth and quiet. In addition, it may be really rare to find a hijacker who is also a professional pilot. Thus, I guess that the two pilots turned off the communicator actually instead of others on MH370.

Second, why did two passengers use stolen passports? One possibility is that they’d lost their own passports. But most people who meet with such an unfortunate accident will choose to call the police rather than steal other tourists’ passports. And since these two passengers had entered the land of Malaysia they must have had their own passports before boarding MH370. Consequently, I consider that they used others’ passports on purpose so as to hide their real identity. But why is it that the custom officers couldn’t identify their appearances from the photos on the passports? For my part, it is likely that the officers let them slip through on purpose.

And the final point is: what is hidden by the Malaysian government if they do want to hide something? It is evident that Malaysia hid the disappearance time in the past 7 days. And Malaysia Airlines is also unwilling to be clear about the case of the plane. What’s more interesting is that Malaysian media are not so active about the progress of this case as the media from UK, USA and other western countries.

Theoretically, Malaysian media, who represent the attitude of the government to some extent, ought to be really aggressive about the pace of the process and other details about MH370 before the accident in order to assist other countries that participate in the search and rescue operation. But as a matter of fact, the order is not so sequential: The sharp western media publish the most recent events and previous details first, and then Malaysia acknowledge the information or gives ambiguous response. Hence, I believe that Malaysian government just intends to make the issue ambiguous, rather than clarify it.

All three clues above are all pointing to the same inclination that Malaysia, including the government and the airline system, is unwilling to make the case clear, though they pretend to show their urgency about the accomplishment of the issue with the assistance from other countries like China, Vietnam, Japan, USA and others. The clues and details are quite scrappy. Therefore, please allow me to use my imagination to fabricate a story about MH370. Please notice that it is just my conjecture. The story is stated as below:

The case of MH370 had been planned elaborately before the incident was published by public media. An enormous global crime organisation, which might focus on the drug trade or something, made a deal between an organisation in Malaysia. Or the two were just in the one huge organisation and had their business in Malaysia. Their business, or action exactly, was so big that once it had been detected they would suffer a lot in future.

So the organisation had a discussion with Malaysian government: Let the two members go out of Malaysia to the place appointed where the other members of the organisation would meet them. And the goods of trade would be transported with MH370. As a return, the Malaysian government promised to conceal all of the information about the action. But all of the operation was a secret to the public.

After they made a deal with the huge organisation, the Malaysian government began making actions with the state-owned airline company. They asked the custom officer, security check officer and even the pilots to do  as they were told. Afterwards, the two passengers used fake passports to board MH370.

The plane took off as usual. But shortly after its taking off, the airplane turned around to the west, going to the place the two members would have meet with other organisation members. To hide their route, the pilots turned off the radar and communicator as they were told. The appointed place to have a meeting may be on a tiny island on or around Indian Ocean. It is probably in the territory of another country except the countries not involved near Malaysia.

Maybe when the case is solved and the fact is shown, none of us will have thought that the country could possibly do that. To hide the organisation’s action, the Malaysian government now is just making the situation a total mess so as to distract the entire globe. I guess that when the attention on this issue is going to fade, the organisation will send the airplane back just like the plane was absorbed into a time tunnel and then came out. As for the hundreds of passengers on the plane, the organisation will tell them how to respond to the questions from the public. Of course, they’ll be altogether told to say they got into a supernatural phenomenon. Thus, everything seems to be peaceful to the globe.

If my speculation is reasonable, MH370 now is at a secret place, which is likely a small island in the Indian Ocean or somewhere in the Middle East. All passengers on MH370 are detained by the crime organisation but basic living goods are provided. Additionally, the organisation is filling their brains with how to use lies to comfort the world after they are sent back in the future. In other words, they’re safe currently. And that’s all my analysis and conjecture about the whole process of the case of MH370.

Original published by contributor at: Teen Ink – What Might Have Happened to MH370 Flight?