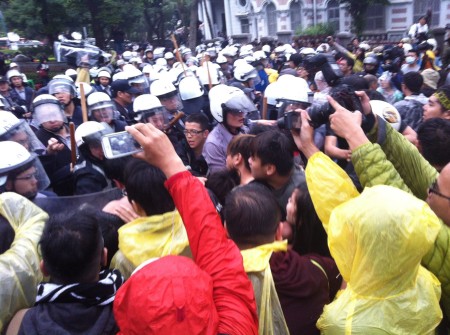 As the Sunflower Movement stated upon leaving Taiwan‘s legislative chamber, they would return. The movement never had “tunnel vision”, but was focused on a long list of grievances. The secret “black box” trade negotiation between China and US Military ally Taiwan was only the one straw on the camel’s back.

In this recent round of government v peaceful assembly, the topic is the island’s controversial fourth nuclear power plant. Especially after Fukushima in 2011, the earthquake-plagued people of Taiwan want nothing to do with nuclear energy. So it seems, the government doesn’t care.

Nuclear power objections in Taiwan have been rising and were frequently address during the three weeks that the legislature was occupied. Much of the street art protested nuclear power. Shortly after the students left the chamber, Lin I-hsiung (林義雄) began an “indefinite” hunger strike over the nuclear issue. A crowd quickly surrounded him, attracting many of the peaceful demonstrators from the trade agreement protests.

At 3:00 am this morning, Taipei police began using force to remove a crowd reported to be about 5,000. By 11:00 am, police were reported to have used a water cannon 47 times. Unlike the March 24 incident at 4:00 am, Taipei police can be seen using the water cannon in broad daylight. Though, daylight seemed to be less preferable as it was also reported that by 7:00 am the cannon had been used 45 times.

According to the report of the cannon being used 47 times, police are also “sneaking in” (sucker) punches and kicks at people in the crowd,  as seen in this video. As police stationed in other parts of Taiwan have explained, Taipei’s police may hit peaceful demonstrators merely on account of being fatigued and generally irritable. This statement came from a police officer who is sympathetic to the Sunflower Movement, but was explaining the perspective and disposition that the police have in Taiwan. He added that those police should be held responsible for their actions and, while their behavior was understandable, it is not excusable.

As of today, the “sunflower” presence has been in the spotlight for 40 days and nights. Police have been working extended and difficult hours. Everyone is strained. While police brutality stirs distrust, Taiwanese don’t blame individual officers as much as they blame the Executive Yuan and Taipei City Government for creating situations and administering police in such a way that is irritating the island at large, police and protesters alike. Here is an example of a moment by moment report of police brutality.

While the people have expressed their determined objection to the fourth nuclear power plant in Taiwan multiple times, the government continues to press the matter, as if the government views public opposition as a temporary fad that will quickly pass. The controlling faction, the KMT, announced that the plant’s construction would halt, but said nothing about the program being terminated. This continues a trend of the KMT announcing decisions of the government they control, rather than Taiwan’s government announcing its own decisions. This further indicates that KMT faction members don’t distinguish between their own political party and the government of Taiwan. The KMT also announced government decisions during their trade talks with China, before the legislature was occupied. As explained by the Sunflower Movement’s news page, this “halting” of construction, rather than “terminating”, was interpreted by objectors as the KMT playing a game of politics, intended to appease the people without demonstrable respect for public welfare.

Like Loading...
‹ Prelude to Conflict: Asia, April 28
Chengdu man uncovers 800-year-old terracotta figurine after peeing on the side of the road ›