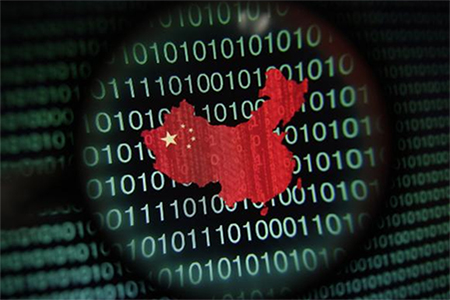 A map of China is seen through a magnifying glass on a computer screen showing binary digits in Singapore in this January 2, 2014 photo illustration

A U.S. grand jury has indicted five Chinese military officers on charges of hacking into American companies for information on nuclear plant design, solar manufacturing and other secrets in the toughest action taken by Washington to address cyber spying.

China denied the charges, saying they were “made up” and would damage trust between the two nations. The Chinese foreign ministry said it would suspend the activities of a Sino-U.S. Internet working group.

Officials in Washington have argued for years that cyber espionage is one of the nation’s top national security concerns because foreign hackers have stolen secrets from defence contractors and technology secrets that could pose a threat to U.S. prosperity.

Yet the indictments mark the first time the United States has filed charges against specific officials of foreign governments, accusing them of corporate cyber spying.

“When a foreign nation uses military or intelligence resources and tools against an American executive or corporation to obtain trade secrets or sensitive business information for the benefit of its state-owned companies, we must say, ‘enough is enough,'” U.S. Attorney General Eric Holder said at a press conference.

Officials declined to estimate the size of the losses to the U.S. companies at issue, but said they were “significant.”

Some of the companies gave their response to the indictments.

“We are happy that the American government is taking the initiative now and we support the U.S. authorities’ investigations to investigate this under criminal law,” SolarWorld CEO Frank Asbeck said in a statement.

Alcoa spokeswoman Monica Orbe said: “To our knowledge, no material information was compromised.”

The move “indicates that DOJ has ‘smoking keyboards’ and (is) willing to bring the evidence to a court of law and be more transparent,” said Frank Cilluffo, head of the Homeland Security Policy Institute at the George Washington University.

American businesses have long urged the government to act against cyber espionage from abroad, particularly by China.

Sceptics said U.S. authorities wouldn’t be able to arrest those indicted as Beijing would not hand them over. Still, the move would prevent the individuals from travelling to the United States or other countries that have an extradition agreement with the United States.

“It won’t slow China down,” said Eric Johnson, dean of the business school at Vanderbilt University and an expert on cyber security issues.

Experts said the indictments would have some impact on those accused of hacking U.S. companies.

Stewart Baker, a former NSA attorney, said the hackers named in the indictments might have trouble getting jobs in China’s private sector when they move on from employment with the People’s Liberation Army.

“In the long run, it could even hurt your employability in China, because U.S. government is going to look askance at Chinese firms that hire former cyber spies,” said Baker, a partner with Steptoe & Johnson LLP.

In an indictment filed in the Western District of Pennsylvania, prosecutors said the officers hacked into computers starting in 2006, often by infecting machines with tainted “spear phishing” emails to employees that purport to be from colleagues.

Prosecutors alleged that one hacker, for example, stole cost and pricing information in 2012 from an Oregon-based solar panel production unit of SolarWorld. The company was losing market share at the time to Chinese competitors who were systematically pricing exports below production costs, according to the indictment.

Another officer is accused of stealing technical and design specifications about pipes for nuclear plants from Westinghouse Electric Co as the company was negotiating with a Chinese company to build four power plants in China, prosecutors said.