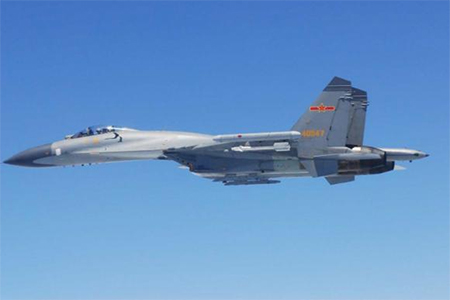 A Chinese SU-27 fighter flies over the East China Sea, in this handout photo taken May 24, 2014 and released by the Defence Ministry of Japan May 25, 2014

Chinese fighter jets flew within a few dozen meters of Japanese military planes over the East China Sea, Japanese officials said on Sunday, prompting the defence minister to accuse Beijing of going “over the top” in its approach to disputed territory.

Chinese SU-27 fighters came as close as 50 meters (170 feet) to a Japanese OP-3C surveillance plane near disputed islets on Saturday and within 30 meters of YS-11EB electronic intelligence aircraft, the ministry said.

“Closing in while flying normally over the high seas is impossible,” Defense Minister Itsunori Onodera told reporters in comments broadcast on TV Asahi.

“This is a close encounter that is outright over the top.”

Onodera said Japan conveyed its concerns to the Chinese side through diplomatic channels. He also said the Chinese planes were carrying missiles.

A ministry official said it was the closest Chinese warplanes had come to aircraft of Japan’s Self-defence force.

China‘s foreign ministry could not be immediately reached for comment.

Tensions have been running high between China and its neighbors over Beijing’s assertive stand on claiming land and sea territory.

China lays claim to Japanese-administered islets in the East China Sea, known as Senkaku in Japanese and Diaoyu in Chinese. It is also pressing its claim to almost all the South China Sea, brushing aside claims by several southeast Asian states.

China’s proclamation last November of an air defense zone covering disputed islands and areas in the South China Sea have raised concerns that a minor incident in disputed areas could quickly escalate.

Sino-Japanese ties have long been strained by allegations in China that Japan has not properly atoned for its wartime aggression and by the spat over the uninhabited islands.

Japan scrambled fighter jets against Chinese planes 415 times in the year ended in March, up 36 percent on the year, while in waters near the disputed islands, patrol ships from both countries have been playing cat-and-mouse, raising fears of an accidental clash.

Japanese land, sea and air forces joined last week to simulate the recapture of a remote island, underscoring Tokyo’s concerns about the security of the islets.

Tensions between China and its neighbors have also risen sharply in the South China Sea in recent weeks, following the deployment of a Chinese oil rig in waters also claimed by Vietnam. The deployment sparked anti-Chinese riots in Vietnam.

The Philippine foreign ministry this month accused China of reclaiming land on a disputed reef in the South China Sea and said it appeared to be building an airstrip.

Like Loading...
‹ Russia and China’s alliance is an illusion; each wants to dominate the other
Seven big problems that China’s large economy can’t solve ›