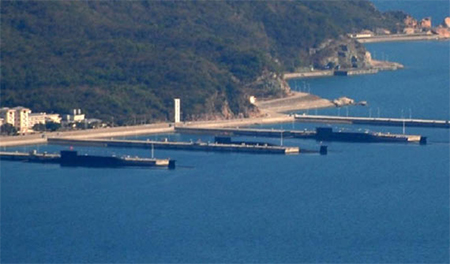 Canada’s Kanwa Defence Review (a foreign Chinese media publication) published an article on May 23, 2014 on three strategic nuclear submarines emerging (SSBN) at Yalung Bay, Sanya, Hainan Island at the same time. Some analysts regard them as 094 submarines. The article regards the appearance as a trend deserving much attention.

The article believes that one of the three SSBNs at Yalong Bay, Sanya is probably the same as that which appeared at Hulu Island. The fact that three SSBNs appeared at the same time at Sanya proves the greater importance Chinese navy attaches to its No. 2 Second SSBN Fleet than its No.1 SSBN Fleet. Of course, there is no denial of the possibility that the three SSBNs are new ones undergoing sea tests, and berthed temporarily at Sanya.

The article says that more frequent appearance of SSBNs in Sany is normal as the sea is deeper there. An SSBN submerged deep and remain still there is very difficult to detect.

Three 094 SSBNs can carry 36 nuclear warheads and thus have initial second-strike capability. As China’s old 092 SSBNs have remained in port increasingly frequently, they are believed to be decommissioned soon. In the future, ICBMs constitute Chinese nuclear submarines’ major combat capabilities.

According to the article, in 2013, a new attack nuclear submarine (SSN) was found by satellite at Hulu Island. China has commissioned two 093 SSNs; therefore, soon there will probably be a third new SSN in service. However, we cannot tell whether it was a 095 or 093A submarine until it is seen near land.

Source: huanqiu.com “News spread on the Internet of three strategic nuclear submarines appearing in Sanya at the same time: Kanwa says it deserves much attention” (summary by Chan Kai Yee based on the report in Chinese)