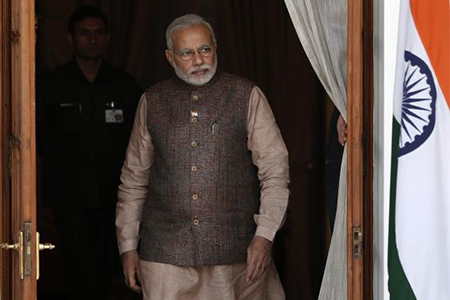 India’s Prime Minister Narendra Modi comes out of a meeting room to receive his Bhutanese counterpart Tshering Tobgay before the start of their bilateral meeting in New Delhi May 27, 2014

India and China have rapidly expanded commercial relations in recent years but political ties remain difficult, after a dispute over their Himalayan border that led to a war in 1962.

But Modi, who took power last month, is seeking to engage with India’s neighbours, including China. A peaceful and stable neighbourhood would help him pursue his economic goals at home.

On Monday, he met Chinese Foreign Minister Wang Yi, who was visiting India as a special envoy of China’s president to build ties with the new administration in New Delhi.

On Sunday, Wang had a meeting with his Indian counterpart, Sushi Sward, that lasted more than three hours. It was the first high-level engagement between the two countries since Modi assumed office.

“The two sides will remain in touch through the diplomatic channel to make necessary arrangements for these visits and for other meetings and exchanges of leaders on the sidelines of multilateral summits,” the Indian foreign office said in a statement after Wang’s meeting with Modi.

It gave no other details. Modi has already invited Chinese President Xi Jinping to visit New Delhi later this year.

India was once viewed as a rival to China’s economic juggernaut. Both the economies have slowed in the past two years, but India’s slowdown has been dramatic.

Asia’s third-largest economy grew 4.7 percent in the fiscal year that ended in March. That was the second straight year of sub-5 percent growth, the longest slowdown in more than a quarter of a century.

Modi, who last month won the strongest parliamentary majority in the past 30 years on a promise of economic revival and jobs, wants to push infrastructure and skill development – a model followed by China to boost economic growth – to promote a turnaround.

“Scale, skill and speed. If these three strengths we can stress upon, then we can rise to the challenge of competing with China,” he said at a book launch event on Sunday.

Modi has revealed plans to emulate China’s economic rise, and some economists believe that rise will be rapid under Modi.