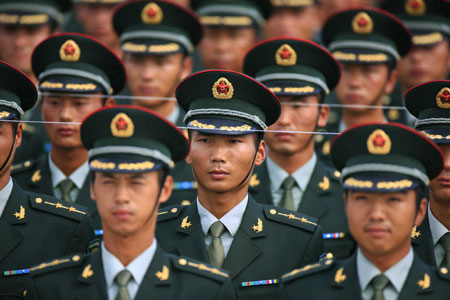 China is on the verge of destroying a geopolitical miracle. In 1980, its economy was less than one-tenth that of the United States. In 30 years, China rose to become No. 2 in the world, without disrupting the world order.

Suddenly, with little warning, three decades of careful management of its external challenges have been replaced by three years of assertive and occasionally reckless actions.

This new posture partly explains an emerging Western media consensus that China has become an expansionist military power, threatening its neighbours and the world.

But before this consensus is set in stone, we should remind ourselves what a large, complex society China is: Neither the country nor its government is monolithic. On a recent visit to Beijing, I saw that a lively debate is taking place among senior leaders on the strategy China should adopt as it moves toward becoming the world’s No. 1 economy.

In Western terms, there are both “hawks” and “doves” in the Chinese establishment. The hawks argue that China has been humiliated for over a century. Now that China is strong, they say, it can stand upright, and assert its case boldly, both in the East China Sea and in the South China Sea. My colleague Prof. Huang Jing at the Lee Kuan Yew School of Public Policy has said that young officers of the People’s Liberation Army are leading China on a collision course with America.

I agree. These Chinese hawks are dangerous. We can only speculate on what’s driving this aggressiveness among the officer class. Like members of other military establishments, they may have a vested interest in tension, rather than calm.

But the “doves” have not lost the debate in Beijing. Instead, they are using the current wave of criticism of China in the Western media, as well as a new Pew Research Center survey that shows the rising anxieties of China’s Asian neighbours, to remind the leadership of the wisdom of Deng Xiaoping’s advice that China adopt a low profile as it emerges as a world power.

China’s decision in July 2012 to block a joint statement on the South China Sea from the Association of Southeast Asian Nations, the doves argue, was an act of folly. It alienated Asean, a multinational entity that represents nations with populations totaling 600 million, and that China had hitherto cultivated assiduously. Similarly, they say it is unwise for China to defend the “nine-dash line” map of its territorial claims in the South China Sea too aggressively when China, as the world’s largest trading power, has far larger interests in maintaining open seas globally.

They argue that China’s recent aggressive behaviour has unleashed a “tiger” of anti-China sentiment that will be difficult to cage again. Most important, they say, time is on China’s side. It can afford to be patient as its power grows.

Given this internal debate, it would be unwise to rush to judgement. China will not necessarily become more hostile. Western prophecies of a dangerous China could even prove self-fulfilling if they provoke a nationalist backlash. The Chinese are still haunted by the humiliations endured at the hands of Western powers in the two 19th-century Opium Wars. The surge of anti-China opinion journalism is feeding the hawks’ assertion that there is a “containment conspiracy” on the part of the West.

When Mao Zedong and Deng ruled China, they paid scant attention to public opinion. Both leaders made significant territorial concessions when they settled China’s border disputes with Russia and Vietnam. Deng even made a generous offer of a “package plan” in an attempt to settle the Chinese-Indian border dispute in 1980. Today, no Chinese leader, not even President Xi Jinping, can make unilateral concessions of that kind.

Chinese public opinion matters in a way it never did before. China now has the largest Internet user community in the world; it is dynamic and vibrant — but also in danger of being dominated by the more virulent voices. Chinese leaders must be responsive to Chinese public opinion, but the West also has a role to play, in realising how its actions can inflame rather than calm nationalist sentiment.

The priorities of China’s leaders have not changed. They spend perhaps 90 percent of their time focused on internal, not external, issues. To succeed in their reform efforts, Mr. Xi and Prime Minister Li Keqiang face considerable domestic challenges.

They have begun a major campaign against corruption. While this effort is undoubtedly entangled with factional struggles within the party, corruption is the one force that could ruin the legitimacy of the Chinese Communist Party. Success is far from guaranteed, with opponents devising ingenious ways of protecting themselves. Senior army figures, it has been suggested, may be stoking external tensions to save themselves from internal investigations.

Above all, the economy looms large in the minds of Chinese leaders. The need to reduce the role of state-owned enterprises is one of the major challenges facing the nation. China now produces seven million university graduates a year, many of whom cannot find work. This is a far bigger issue for China’s leaders than sovereignty over some barren rocks in nearby seas.

Since the leadership wants to focus on domestic problems, the world should let it. The international community has a clear interest in the doves winning out over the hawks in the internal debate over China’s geopolitical role, so it should ask itself one simple question: What can we do to help the doves?

Kishore Mahbubani, a former ambassador to the United Nations for Singapore, is the dean of the Lee Kuan Yew School of Public Policy at the National University of Singapore.
Source: New York Times – Helping China’s Doves