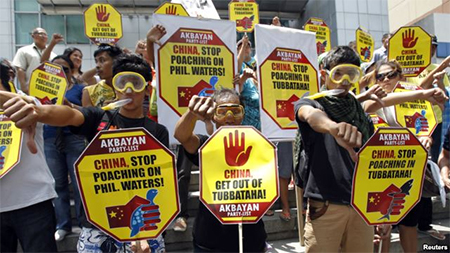 Protesters wearing snorkels and masks show the thumbs-down sign during a protest rally in front of the Chinese Consular office at the financial district of Makati city, metro Manila, April 10, 2013

A court in the Philippines has given long jail sentences to 12 Chinese fishermen for fishing illegally in the South China Sea.

It is the latest incident likely to raise tensions between Manila and Beijing, which have competing claims in the resource-rich region.

The Chinese fishermen were arrested in April 2013 after their boat ran aground at the Tubbataha Reef in the western Philippines.

The coral reef is well within Philippine territory and is not claimed by China. The fishermen say they were taking refuge there during a storm.

The captain of the boat was given 12 years in prison. The 11 others received jail sentences ranging from six to 10 years.

The men face possible additional jail time because they were found in possession of a protected species of mammal called a pangolin.

The men, who also received a $100,000 fine each, pleaded not guilty to all the charges.

China claims nearly the entire South China Sea, putting it at odds with several of its neighbors, including the Philippines.

The Philippines earlier this year challenged the legality of China’s claims at an international tribunal in The Hague. Beijing was angered by the move and has refused to participate in the case.