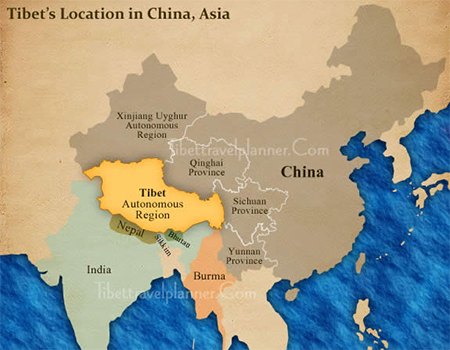 The Chinese invaded Tibet in 1950 with the Dali Lama fleeing in 1959: I am not going to go into the rights and wrongs of China‘s involvement in Tibet other than to state the Chinese have had cultural and political links with the area for centuries. As the post implies these are observations from my recent trip.

On my first trip to China I was struck by the extent American companies had penetrated the domestic market. Mcdonalds, KFC, Pepsi, Coke and many other Western brand names were everywhere you looked. In subsequent trips, its seemed to me, that capitalism and the accumulation of money was the new mind-set of the Chinese people and its Government.I have never felt the communist bogey-man looking over my shoulder at any time during my visits there; sure there were armed soldiers at the entrances to what appeared to be government buildings, standing as stiffly as the starched collars on their shirts, but I always felt relaxed and began to feel that the autocratic dehumanising image of the Chinese Government was a fictional narrative pedalled by the West’s own propaganda machine.

As a result the sense of sinister that I had been expecting on my first couple of visits never materialised. China looked to me as if the massive influx of Western companies and ideas was having a positive effect- whether it is or isn’t is subjective. If you live in the urban areas on the east coast of China you are more likely to be doing better than one of your compatriots living in the more impoverished rural areas.So it was with great interest to see for myself what the Chinese were up to in one of the more troubled areas of their nation—Tibet. The purpose of the trip was to punish my alcohol starved liver, and visit Everest Base Camp with some close mates. To be honest I didn’t expect Tibet would feel or look any different from any other part of China. I’m not referring to the countryside (it is dramatically different), but to the atmosphere the Chinese are creating by their presence in a country that want to be rid of them.My first view of Lhasa (Tibet’s capital) was the train station where we were to meet our guide, and it was immediately evident that the Chinese Government were operating at a level that one could only describe as DEFCON FOUR. There were dozens of uniformed police and a heavily armed military presence. We were not allowed to linger for long and were ushered out of the station. The road in an out was closed off by a steel tube boom gate and would only open when the next scheduled departure or arrival was due and even then the passengers who were escorted by the military directly to the departure hall of the train station.

You were not allowed to wander the station grounds or take photos. The military presence was not limited to soldiers on the ground; Lhasa’s skyline would often have military aircraft streaking across it. When our guide collected and bundled us onto a mini-bus, she was insistent that we not take photos of the police, the military or official buildings, because the consequences could mean deportation and the tour company having their licence revoked.The next morning while standing outside our hotel taking in the sights (and smells) of Lhasa’s old town and smoking a dart, an old Tibetan man approached me; with a warm smile stretched across his face he leaned in close and said in almost whispered tones Dali Lama good!

After being satisfied with my thumbs up walked off happy with his moment of gentle defiance against his Chinese Overlords. Our guide was very knowledgeable about Buddhism and its history and practice, but any talk of the Dali Lama was in hushed tones and I cam to realise how frustrated Harry Potter must have felt about constantly referring to Voldermort as ‘You-Know-Who’ and ‘He-Who-Must-Not-Be-Named.’There is a sense of sinister control in action; our road trip to Everest was to take us three days so we could acclimatise our sea level respiratory systems to life at 5,000 meters (which is an awful long way up), and in that time our bus was stopped on at least twenty occasions for what was described as log book and speed checks. On four occasions, we all had to exit the bus for passport checks.

It soon became apparent that the stops weren’t about speed, but about authoritarian presence. The police would log the drivers time at each checkpoint and again at the next where they would average the speed out and fine them if they had been going too fast (much like the heavy vehicle checking stations in Australia). It became farcical as the driver would time himself and pull up a hundred meters away (and in full view of authorities) until he felt the time was right to check in, even though the very fact of pulling over was an admission of guilt.

It also did nothing for safety as the driver would then drive like a lunatic between each checkpoint causing nauseating fear, and in the case of one of our number (known as the OC) regular and ear-splitting imitations of Graham Kennedy’s famous (infamous?) crow call.This was all about controlling the flow of people. On this bus trip I also discovered that the majority of Tibetan’s, unless they had legitimate business interests outside of China, had no travel documents that would allow them to leave Tibet and China—they were prisoners in their own country. All this checking and cross checking hit new heights of absurdity at Base Camp.

After an exhausting day and after two of our number succumbed to altitude sickness, we finally settled down to sleep, only to be woken on numerous occasions by security entering our yak-hair tent hotel and shining flash lights in our faces. I suffer from sleep apnoea and have a CPAP machine hooked up to my face, which I admit can be a startling sight for the uninitiated, and each time they entered they seemed to linger over me for what seemed to be minutes at a time. I had a feeling they would go back to yak-hair-tent-command and inform the shift change to check out the intensive care patient laid out in tent number five.If one spends any amount of time with Tibetans you will find they are a people who believe they are fighting for cultural survival, a belief that is only confirmed in their minds from official Chinese policies that encourage mixed marriages (1). According to some critics the new emphasis indicates the level to which the Chinese Party state seeks to interfere in people’s private lives and create a disconnect in the cultural lives of the Tibetan people (2).In China Internet censorship is most evident in the blocking of social media sites like Facebook and Twitter. However, my Internet use on overseas trips is limited to emails and browsing for news items from home, especially the sports updates. I have never really noticed censorship until I started surfing for specific information about Tibet’s history. The links would all be there but any site that even had a hint of controversial content, especially information about the Dali Lama would come up with a page not found error. This became quite frustrating and made me appreciate the level of freedom of information we have available in Australia.In 2011 China announced a $21 billion US spending program to be spent on 226 major infrastructure projects. This money could be seen everywhere; there was a lot of construction under way, particularly in rail and power infrastructure. Lhasa looked busy and prosperous, due it must be said, to Chinese money and the huge numbers of Chinese tourists. Our guide even admitted that the standard of living had been steadily on the increase in Tibet.

This is not to say that the ever present fear of losing your cultural identity is lessened by large wads of cash being thrown about. Chinese authorities seem to be approaching the ‘Tibet problem’ in a couple of ways. The first with a heavy hand, that is a response to the violence in 2008; this authoritarian approach is a warning that they will not tolerate any nonsense in the future. The second is an economic strategy, one that is sharing the largess of the Chinese economic boom, a strategy that hopes to prove to Tibetans that they are benefiting from being part of China.

I have no idea if it will work and despite the billions in spending and the thousands of Chinese flags fluttering in the rarefied air, there seems to be a palpable anti-Chinese mood amongst Tibetans, a mood highlighted by them showing us pictures of Chinese tourists disrespecting their holy sites and even one horrific picture of a (supposedly) Chinese man eating a baby (3). This picture is apparently the work of a Taiwanese artist, but to assume that this is regular practice in China is wrong and more importantly inflammatory—which is the whole point. The Tibetan opposition to Chinese rule is spinning a narrative that the Chinese are uncouth, ignorant and even barbaric.China’s desire for unity with Tibet has a long way to go.

(3) This picture is easily found on the web and is truly disturbing; along with images of foetus soup it almost make me  wish for a censored net….

Originally Published at: Beyond the Blue Divide— Observations from Tibet: Part 2