India being hotly courted internationally; difficult for China to woo 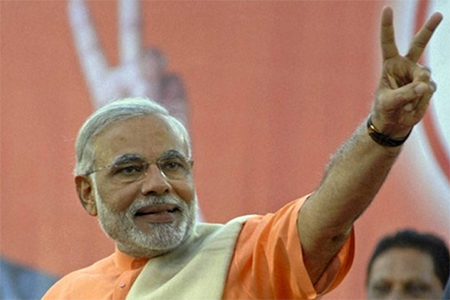 The US wants India to encircle China in China’s west; Japan wants India to join it in confronting China, Russia wants to have a Russia-China-India alliance while China wants to solve border disputes to improve ties with India.

When Modi won the election, he said good relations with China were his priority, but the US and Japan soon invited Modi to visit them in order to win him over.

The US does not seem to have made much progress in mending ties with Modi, perhaps because it has snubbed Modi for too long. Japanese Prime Minister Abe seems to have won over Modi, perhaps due to his personal friendship.

These words gave the impression that Modi had attacked China, and had joined Japan in confronting China.

Anyway as Japan promised to provide India a loan exceeding $500 million, Modi had to say something to please Abe. His best strategy is to please all the four suitors so as to get benefits from all of them. I believe Modi is clever enough to play such a diplomatic game.

Abe, however, does not rest at ease. He is afraid that with Xi’s charm, Chinese President Xi might win over India when Xi visits India in mid September. Abe visited India in haste to counter Xi’s visit and consolidate the partnership he had built with India.

In its report today, Reuters regard Modi’s recent efforts to develop the disputed border area with China as an action to deal with China. The following is the full text of Reuters report:

India has eased restrictions on building roads and military facilities along its disputed border with China, as the new government seeks to close the gap on its neighbour’s superior transport network, and take a stronger stance on Beijing.

Indian environment minister Prakash Javadekar told Reuters he had relaxed environmental rules within 100 km (62 miles) of the contested border in remote Arunachal Pradesh in order to speed up construction of some 6,000 km of roads.

The move, which also allows for the construction of army stations, arms depots, schools and hospitals in the sparsely populated Himalayan region, was announced days before Chinese President Xi Jinping visits India on Sept. 17-18.

“This is about defence preparedness,” said Javadekar. “On the Chinese side of the border, not only have they built good roads, they are building up their railway network. Our army faces problems because of the bad quality of roads,” he added.

Work on the roads will start in the coming months.

India’s shift is consistent with expectations that Hindu nationalist Prime Minister Narendra Modi, who swept to power in elections four months ago, would take a tougher line on territorial disputes with neighbouring countries.

Asian great-power diplomacy stirred to life when Modi made clear his intention to play an active role on the world stage by inviting regional leaders to his inauguration in May.

His first bilateral visit outside the region was to Japan, and Japanese Prime Minister Shinzo Abe made a two-stop tour of South Asia earlier this month, pre-empting Xi’s trip to the region this week.

After taking office, Modi moved quickly to appoint a former army chief as a minister for the northeast border region to accelerate development.

China has vastly improved roads and is building or extending airports on its side of the border in Tibet.

According to a 2010 Pentagon report, it had placed nuclear-capable intermediate missiles in the area and deployed around 300,000 troops across the Tibetan plateau.

The Modi government’s roads program could aid plans to establish a mountain strike corps of 80,000 troops who can move easily along its border.

The world’s two most populous nations fought a brief frontier war in the area in 1962, and Chinese maps still show all of Arunachal Pradesh within China’s borders.

Indian efforts at development in the region have been relatively restrained in recent years. In 2013, Modi’s predecessor announced plans for 850 km (530 miles) of new roads in the border region, and proposals to upgrade airfields made little headway.

Previous governments deliberately neglected infrastructure in Arunachal Pradesh, partly to create a natural buffer against any Chinese invasion. That policy was dropped when the extent of development on China’s side became clear.

“This is a complete shift in strategic thinking,” said Namrata Goswami, a research fellow at the Delhi-based Institute for Defence Studies and Analyses.

The neighbours have a complicated relationship marked by growing economic ties but also distrust, particularly over their unresolved territorial disputes.

The two armies were locked in a three-week standoff in May 2013 in the western Himalayas after Chinese troops set up a camp at least 10 km (6 miles) inside territory claimed by India, triggering calls that India should stand up to its neighbour.

Speaking in Beijing recently, Indian National Security Advisor Ajit Doval, a hawkish former spy chief who has in the past expressed doubts about China’s motives, said the two nations’ disputed border would be discussed during Xi’s visit.

“Both sides have agreed to take steps to ensure the peace and tranquility of the border, and seek a fair, reasonable resolution both sides can accept on the basis of peaceful, friendly talks and consultations,” Chinese Foreign Ministry spokeswoman Hua Chunying told a news briefing on Thursday.

Under the easing of environmental rules, Javadekar said road building within 100 km of the “Line of Actual Control” – the de facto but disputed border between India and China – would be brought under a single general approval scheme, while the amount of reforestation required would be lowered.

India is also pushing ahead with a proposal for electricity projects in states bordering China, and has said it will continue even if international development agencies which had earmarked cash to support the underdeveloped region do not back schemes in areas claimed by China.